Any man that's ever come home from a fruitless day at mall stores filled with ill-fitting choices knows that for every body there are certain styles that flatter and many more that will not. 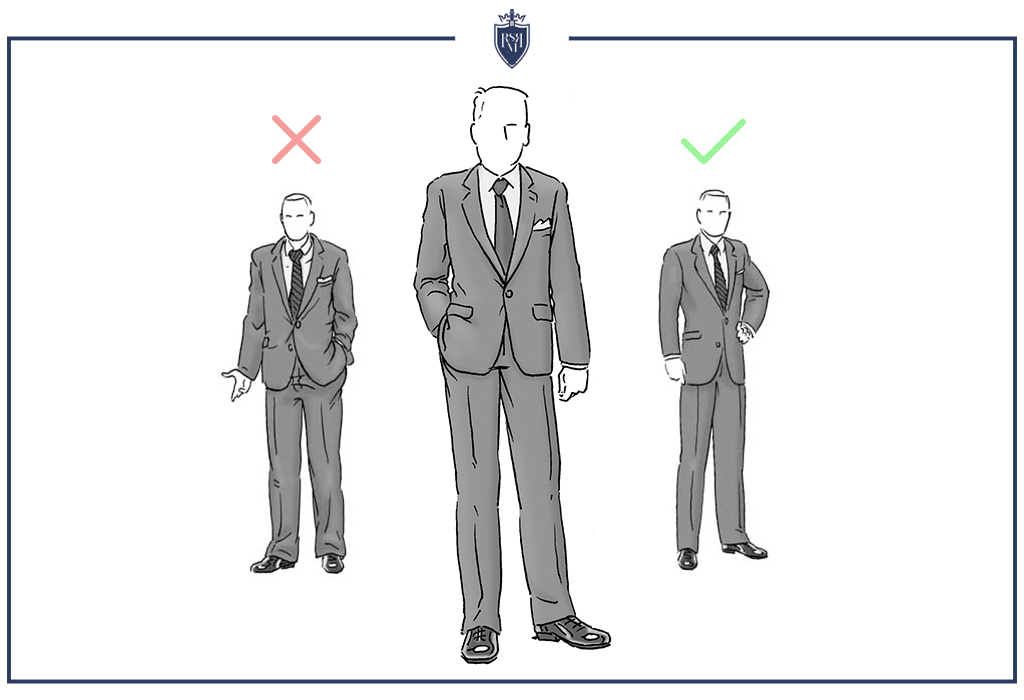 The key to the difference lies in the individual man's understanding of his own body and the styles that work well with it.

In this article, the specific needs of the tall, thin man are considered to most shorter people anyone over 6'4″ is simply a “big guy,” but the needs of a tall man who is also slender are very different from the needs of a muscular or top-heavy man the same height.

Needs of the Tall, Slender Man

If you stand above 6'4″ or so, the odds are you're already used to being the first person everyone notices in a group. While there's nothing wrong with that, people can become uncomfortable if they feel that they're being loomed over, so a key stylistic goal of any tall man will be reducing the impact of your height.

The looming effect is mostly produced by the viewer's eye instinctively traveling up the vertical line of your frame (and craning their neck to do it), so anything that breaks or distracts from that line will serve you well.

Nothing is going to make you vanish into the background, but a combination of horizontally-patterned clothing will go a long way toward making you easier on the eyes — and the neck.

Adding Breadth To The Slender Man

As a man who is not only tall but also slender, you appear even more vertical than fellow giants who have a little more breadth to their frames. Besides looking out of proportion, clothing that emphasizes your slenderness may actually add to the eye-catching impact of your body, and not in a good way — the last thing you want is to be memorable only as “that really twiggy guy.”

A broader silhouette will normalize your visual impact, making you look more like an average man writ on a grander scale than a statistical outlier.

The presence of a truly tall man's height can overpower other impressions he might have preferred to make. Getting people to notice and remember things that aren't your height is a chore, so clothing that makes an interesting statement is even more valuable for tall men than for others.

Your look doesn't need to be aggressive or attention-getting (in fact, bold colors or other touches that draw the viewer's eye are overkill, since everyone will be looking at you first no matter what you wear), but it should stand out from the crowd of suits and ties.

Menswear For The Tall, Slender Man: Heels To Head

From head to toe, undershirt to overcoat, the pattern and weave of your garments' fabric is a powerful fashion ally. Tall, thin men benefit from clothing with checks and windowpanes pattern, and can be more adventurous with these unusual patterns than smaller men.

A large frame prevents even bold patterns from overpowering your face and body (though you will want to avoid anything so aggressive as to make you even more eye-catching than you already are).

Horizontal elements in the patterning will break up the vertical journey of viewers' eyes and add a sense of breadth to your narrow shape — consider mixing different horizontal-heavy patterns for the fullest effect, such as wearing a suit with an understated check over a bold windowpane dress shirt.

Vertical striping should be kept to a minimum, and be broad when it does appear; wide-spaced chalk stripes are preferable to an aggressive pinstriping. Solid colors, while they can add an impression of breadth, may be too eye-catching for a very tall man, but in more muted tones may still serve you well.

Less obvious in effect than the pattern and color, the weave of your garments' fabrics will also have an effect on your visual impression. Adding a touch of texture can make solid colors more flattering to the tall man — a simple herringbone weave to a wardrobe-staple blue or white undershirt by RibbedTee softens the impact of the unbroken color, and gives your style an understated personal flair as well.

So long as the effect is not overall vertical, fabrics that add texture to a garment tend to flatter tall men, and are worth requesting.

Wearing a thin sole is the obvious footwear advice for a tall man, but the opportunities don't stop there. A shoe with a strong horizontal presence can be the first step (no pun intended) in breaking the vertical line of your body — the “straight” or “bar” style of lacing, in which the visible laces make horizontal lines across the front of the shoe, can help make a solid foundation for your look. A flatter toe cap contributes to the same effect.

Nothing you do with your shoes is going to shave noticeable inches off your perceived height, but keeping them horizontally-themed will support similar efforts elsewhere, and you'll want the lines of your shoes to match the lines you're establishing higher up anyway. 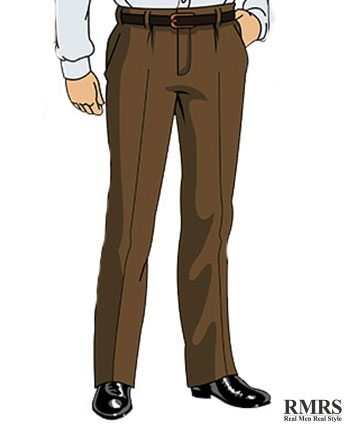 Most tall, slender men carry the majority of their height in their legs, and they tend not to have a lot of weight to carry it with.

A slightly looser trouser with a straight fall can make your legs appear more substantial, and a wider cuff at the bottom will add a stronger horizontal impression and shorten the appearance of your legs.

Pleats are not an ideal choice, unless something about your musculature or your personal style demands them; the vertical lines will appear to stretch your legs.

Be sure to avoid carrying too much in your trouser pockets! Any man's appearance is hurt by a bulging pocket, but in your case it will make your legs look slender and insubstantial if your keys or billfold are able to overpower them.

Rather than suspenders, support your pants with a belt and be guided on what type of belt to wear and buy — the broad, horizontal line of a monochrome belt will slash the vertical impact of your appearance in half, making you much less imposing. 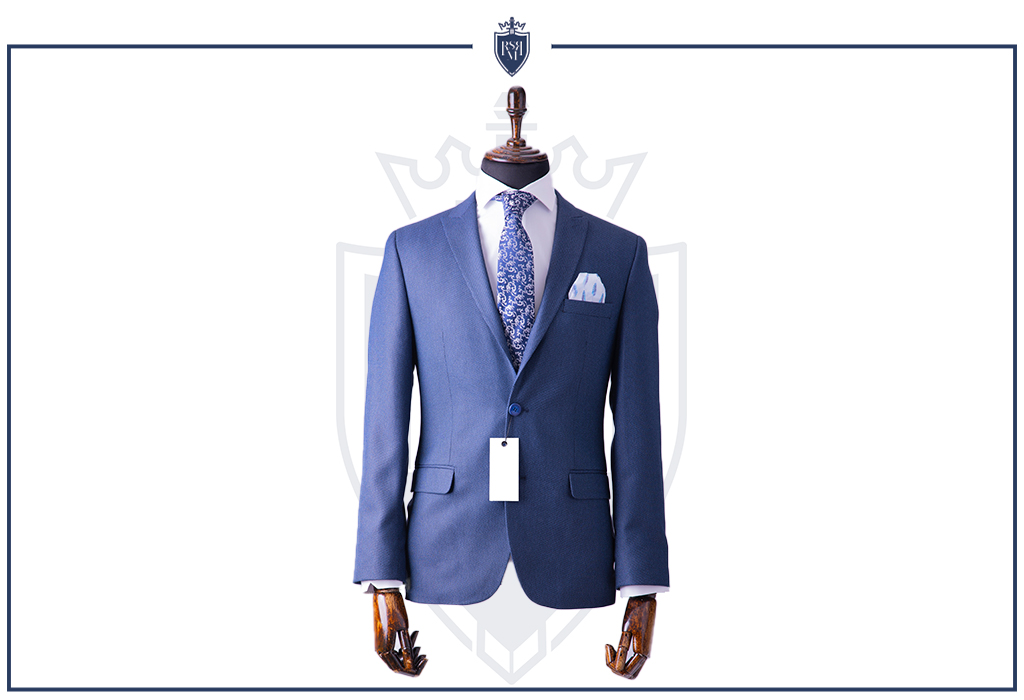 Extra width in the torso is probably the most crucial element in balancing out your height. Choose a jacket that adds dimension with broad, padded shoulders and that falls below the curve of your buttocks in the rear — this creates an extra horizontal line behind your legs, and appears to shorten them as well.

Your secret weapon is the double-breasted suit and its benefits when wearing it. It's a classic look that can appear oversized and awkward on most men. On your height, the extra fold of cloth across the torso adds depth without overpowering your natural shape, and its old-fashioned elegance adds uniqueness to your look without grabbing attention too aggressively.

Help your jacket out with horizontal detailing: pockets should be aligned completely horizontal, not slanted up. Notched lapels are vastly preferable to peaked, and can be cut a little wider for you than normal.

An extra button flap on the lapel or even a boutonniere (a.k.a the flower you put in your jacket lapel) can give a touch of interesting asymmetry to your look and distract from the verticals, as can a pocket square (though you will want to avoid an upward-pointed fold for the latter). A ticket pocket on the right side of your suit jacket, located above the normal pockets, will have the same effect.

Considerations of pattern, as discussed above, are the primary concern for a tall, skinny man's dress shirts, but there are a few other elements that can be helpful — depending on the shape of your face, a spread collar dress shirt may be a preferable choice to the more common point collar dress shirt, giving the appearance of extra breadth.

If you have the know-how to work it (and it doesn't take long to acquire the trick), a pin collar adds an attractive horizontal across the top of your tie.

Your tie should generally be on the wider side of available styles, though it must be long enough to fit your body — a broad tie that falls too short makes a man look like a circus clown.

Horizontal lines in the patterning are less desirable across the limited and mostly-vertical area of a necktie, but slanted diagonals will help broaden your appearance without clashing with horizontals in your shirt or jacket. A heavy knot helps fill you out as well, or you can consider the bowtie as an elegant alternative to the conventional necktie.

Hats are a dicey proposition for tall men, since they add extra inches to a body that needs anything but. Still, a hat that flatters your face is hard to pass up for the truly well-dressed gentleman, and a good hat caps your visual appearance, preventing the viewer's eye from following your vertical shape on up into space.

You will want to avoid anything with a sharp taper, since these hats will make your head look pointy, but a classic homburg or a flat cap for less formal occasions can top you off nicely, giving your appearance a more completed appeal.

Looking over this article, you will notice that there are actually very few styles which the tall, slender man needs to rule out completely even vertical elements like pinstripes or peaked lapels can have their place, properly balanced by other details, but there are enough options within the most flattering elements that no one should ever feel limited in their style.

A well-dressed man of the tall and slender build will wear patterns with confidence, accent with enough detailing elements to overpower a smaller man, and seek out a style that stands out from the crowd. On occasion, he may even choose to abandon some of the horizontal elements and choose to loom — sometimes it can be useful to be “the big guy.” Just be sure to maintain a sense of proportion, keeping an impression of powerful breadth to match your imposing height.

Need more tips on how to dress up based on your body type?