You hardly even KNOW this guy.

Is that smell coming from him?

Here he comes – arms out for a hug.

If you want to make a good impression, rudely pushing someone away isn't an option. However, you don't have to put up with unwanted hugs and kisses. There are ways to steer a middle path and come away unhugged, but still looking like a gentleman with manners.

Today, I'm going to give you five tips on how to do that. You'll also find out where it's rude to shake hands, and what baboons can teach us about etiquette.

#1 – Decide What YOU Are Comfortable With First

If you're not sure if you're good with a hug, deciding in the moment is too late. You can usually spot what kind of greeting is coming your way in advance. You only have a couple of seconds to act – if you try to spot it, decide if you want it, AND deflect it, all in the space of two seconds…you're going to have a bad time.

When someone wants to greet you with a handshake, they will angle one shoulder toward you and put out a single arm once they get close. 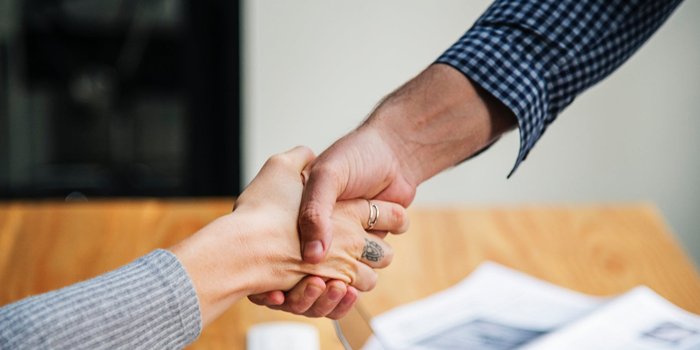 When someone wants to hug, they will approach you with their arms open and their torso facing you in preparation for the embrace.

For a cheek kiss, someone will greet you face first, angle their head out toward you on the approach, and put out one or both hands out to embrace you.

Have tiers of familiarity with the people in your life, and know what you're comfortable with for each category – kiss, cheek kiss, hug, bro-hug, handshake. You want to greet your mom differently from your boss, your boss differently from a new acquaintance, and so on.

#2 – Don't Wait – Initiate The Greeting Yourself

If you've failed at no.1 – if you're about to greet someone and you haven't decided the level of familiarity you want – don't let them decide for you. Instead of waiting to see what's coming, YOU decide and initiate.

For instance, if you immediately stick out your hand to shake hands when greeting someone, they'll follow your lead and shake – even if they were planning to hug. Or if you don't want to touch at all, raise your hand and give them a friendly wave.

Suppose you haven't moved quickly enough to initiate, and someone's coming in for a hug that you don't want.

Thrust out a hand for a handshake AND turn a shoulder. Take your body out of the hug space. Think of it like dodging a punch, and move out of the line of attack. If you take a subtle step back with your left foot, your body will be more side on so it presents less of a target.

In casual situations, you can use the same technique to go for a fist bump or high-five.

Let's say points 1-3 haven't worked and you find yourself trapped in a hug. What can you do to get out of it?

Close contact between male primates is intimately related to fighting. It's SUPPOSED to be a little stressful. They're testing whether they can get close to each other without getting hurt.

Male baboons test this by touching each other's genitals – if you can do THAT to your baboon friend and he doesn't hurt you, you know he likes you!

While we don't do that in human society, our monkey brains still feel the stress of a hug between males, and provide us with a natural way to end it. The back-pat has the masculine quality of play-fighting, and a lot of primates use tapping to end a play-fight – just like tapping the mat in martial arts. Do this and your hugger will instinctively end the hug.

Give them a quick hug back and then simply let go. Usually, the other person will follow suit.

Only give them a stiff one-armed hug back. This unmistakably says ‘I'm uncomfortable with this hug, but I want to be polite.'

I wouldn't recommend the full-on no-hug, where you just stand there like a post and let them unilaterally hug you – it WILL instantly repel unwanted guests inside your bubble, but it comes off as rude.

Ever had people use these hug-ending tactics on YOU?  If so you have something to think about!

Be sensitive to others. Make sure you're not the one making people uncomfortable. If you feel the need to initiate a more intimate greeting, try touching the arm while shaking hands, or the two-handed handshake, as a more intimate alternative that won’t trap people like a hug will.

If you feel the need to initiate a more intimate greeting, try touching the arm while shaking hands, or the two-handed handshake, as a more intimate alternative that won’t trap people like a hug will.

If you're traveling it's worth reading up on local customs to find out what people are likely to be comfortable with. Here are a few examples:

Shout out to Topher White over at the Real Men Real Style Facebook group for his helpful input on this post.

If you'd be interested in quick answers to your style questions, feedback on your outfits, or just hanging out with 46,000 other men who are working on becoming their best selves, check out the RMRS Facebook group.