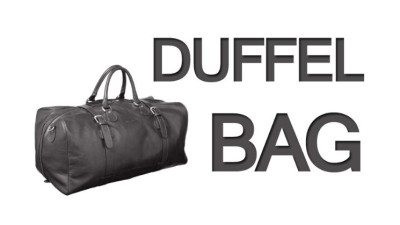 The duffel is a classic piece of luggage.

Originally the word referred to a specific thick fabric, originating in Duffel, Belgium, which was often used to make tall, cylindrical, draw-string bags.

These days “duffel” can refer to any large bag that fits the following general characteristics:

Classic duffels, especially those used by various navies and militaries, open and close at the small end of the bag, like a mailbag or laundry bag, while modern athletic and luggage variants typically have a single zipper all the way across the top of the bag's length. Both are called “duffel bags” these days, so long as they have the basic shape, though bags of the top-opening military style are sometimes called “seabags” or “ditty bags” in reference to older naval terms for the luggage.

Most duffels have two carrying handles: one on the small top end of the bag and one along the longest side. A shoulder strap that connects the two short ends is also common. 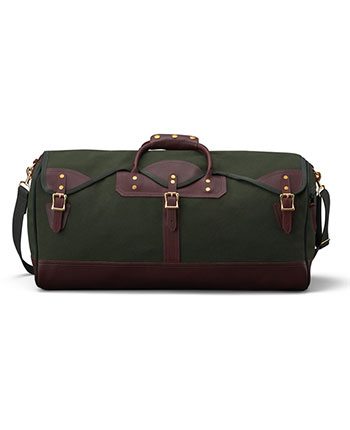 Duffels are luggage for the lazy man.

With a hard-sided suitcase you're stuck playing Tetris, trying to get every item you pack into a perfect little space. Duffels you just throw stuff into until they're full.

They're also a lot easier to pack into luggage compartments on buses or trains, or into car trunks (airplanes aren't an issue since most duffels are large enough to be checked luggage rather than carry-on). And the multiple handles, especially if there's a shoulder strap option, let you switch grips so that you can carry it longer than a conventional suitcase.

Probably as a result, we associate duffels with professional athletes, military personnel, and other people who travel frequently and often need to stow all their gear quickly, throw a single bag into the available transport, and go.

That makes the duffel bag equal parts casual and cool. The soft sides and athletic associations aren't perfect for a business meeting — if you're being met at the airport by Very Important People you'll do better with a suitcase — but they're well and away the coolest luggage to wait with at the taxi stand.

Elvis used one, James Dean used one, Steve McQueen used one, and you can — and should — too. 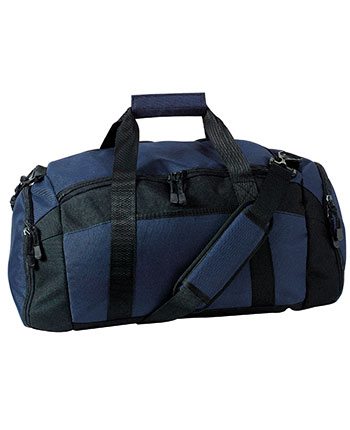 The Gold Standard: What to Look for in a Duffel

For an example of a classy and classic duffel, check out Blue Claw Co.'s Dunnage Duffel. (It's also available in darker leather.)

The Dunnage is on the smaller side of modern duffel bags, which puts it squarely in the middle of historical duffel bags (the obsession with enormous luggage is a modern and an irritating trait that's best resisted). The official measurements are 10.5″ x 10.5″ x 20″ — plenty big enough for clothes and travel gear, but small enough to sling over your shoulder and shlep a few miles if you have to. It even qualifies as airline carry-on (for now), which most duffels don't.

The bag fabric is very tough ballistic nylon, and that's important in a soft-sided bag. The good nylon can bulge a bit when you pack it without tearing (though too much overpacking can still strain the seams and zipper), and it's more thief-proof as well.

The leather straps and piping are stylish and functional. They give the bag a little bit of “shape” to keep it from wrinkling when it's not fully loaded and add some protection along vital seams. It's also more comfortable to hold onto than plain nylon straps, which fold up on themselves and dig into the hands when weighted down.

Throw in a waterproof liner and tough zipper and the Blue Claw Co. Dunnage Duffel has everything I look for in a duffel: light weight, soft shape, sturdy construction, and timeless style.

There are lots of good duffels out there, but this is a solid example for the gold standard in the category.

Previous Post: « Man’s Guide to Ear Care | How to Care for Your Ears
Next Post: How Real Men Real Style Makes Money | All About Affiliate Marketing »