Seeing a play is a different experience than other outings.

Different than a movie, a night at the club, or game night – it's an event in which the dress of the audience helps set the mood.

There are ways that a gentleman can show his courtesy and confidence at the theater.

A play will make you laugh, cry, or think hard about life. It will have you singing along or squirming in your seat. Though not as popular as today's movies, going to a play makes for an excellent date or an evening with friends.

Simply put, there is nothing like a night at the theater.

A gentleman will, of course, follow the rules of respectable society in opening doors for his lady and exercising punctuality, but how does he show his lady, his friends, and the theatre that he is, indeed, a gentleman?

What follows is a gentleman's elementary guide to theater etiquette, and answers to those questions that the gentleman may not have faced.

The Gentleman's Preparations for the Theatre

Prepare for your theater visit well before the night you intend to see the play.

Visit the theater's website or call to find out what's playing or when the next show opens. Then, contact those who will attend with you and get their input. Which show interests them? Which day of the week is best? Which showtime? Which date?

Once the group has picked a show, date, and time, make a reservation with the theater. Make the reservation at least a week before your show date, preferably two weeks if you're seeing a show on a Friday or Saturday evening (these are the most popular times to see a play so they'll be booked up first). The theater may want a credit card to hold the tickets, and policies vary, but often the card is simply a guarantee, and you pay when you pick up the tickets.

Punctuality is a point worth emphasizing.Though individual opinions differ on the importance of being early or right on time, for the gentleman, punctuality is a virtue. Punctuality at the theater doesn't start when he shows up that night.

As a gentleman, it is your responsibility to account for any factor that interferes with your punctuality and overcome it.

If, despite your very best efforts, you still can't get to the theater on time, don't be surprised to meet a locked door after the show has begun. Theatres don't like turning people away, but that's better than interrupting the actors and patrons who arrived on time by letting you in late.

How a Gentleman Dresses for the Theatre

A theater patron who is in serious dressing error will stand out as badly as an actor forgetting a line.

While making the reservation, ask how the management would like you to dress for the show. If it's an opening night, it may be a black tie (tuxedo) affair. At the very least, a gentleman will attend the theater in chinos with a polo or dress shirt.A necktie will look smart here too, and a custom suit won't go amiss, either.

Unless the theater management says otherwise, he shouldn't be out of place in a jacket and tie. This last is dressy, but if he's well-dressed, the gentleman will be looked up to by his fellow patrons rather than looked down upon. 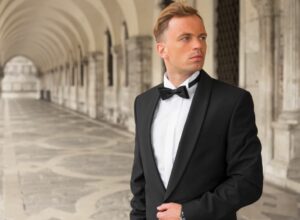 Never wear flip-flops (or anything close) to the theater. This is simple respect: the theater team has spent hours building a set, focusing lights, buying props, rehearsing, cleaning, and nearly hundreds of other little tasks to prepare themselves and their building for your arrival.

They want to look their best for you. If they've gone through all that effort, the least the gentleman can do is put on dress shoes, khakis and a necktie.

The same goes for jeans – you wouldn't wear them to a nice restaurant, would you? Sure they're there to serve you, to give you what you pay for; but when you respect their space and the atmosphere they want to create by dressing nicely, you are contributing positively to your experience as a customer and their experience as a business.

Not dressing too casually to the theatre is a simple courtesy that will show your gentility to your group of friends, the actors, and the theatre.

Gentility after the Curtain Rises

Gentleman's etiquette doesn't end one you're in your seat; it's just begun.

Basic common courtesy should dictate how a gentleman acts after the curtain rises. Mobile devices – phones, pagers, blackberries, anything with lights or beeps – should be off. Not silent, off.

If you're on call for your job, mention this when you make your reservation, and you'll be surprised how the theatre may accommodate you to seat you on an aisle or near a door (mention these things when making the reservation if you have a preference at all; the night of the show they probably won't have the flexibility to move your seat).

Once your mobile device is off, be considerate of the performers and your fellow patrons.

A gentleman won't be unwrapping candy or cough drops during the show, he'll have taken care of that already. He offers his lady his pocket handkerchief if she gets teary-eyed or his jacket if she's cold. A gentleman will abide the management's rules regarding food or beverages in the theatre.

At intermission, he'll visit the concession stand so his lady doesn't have to stand in line. Some theatres serve wine, and a gentleman won't overdo it if the evening is wet. At curtain call, he'll at least politely applaud as long as the audience does; actors are very put off by that one patron who's sitting with his arms crossed and frowning.

A Gentlemanly Exit from the Theatre

Once the actors exit, it's time for the gentleman to make a graceful exit himself. 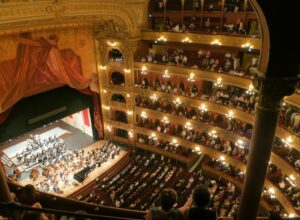 Collect everything you brought – it's easy to leave a single glove or forget to pick up your man's custom overcoat from the rack. Sometimes the actors will greet patrons on the way out of the theatre.

There is no disrespect in skipping the line to move on, especially if you have plans afterward. If the gentleman does say hello to the actors, he shakes their hand, looks them in the eye, and says, “thank you,” or, “good show.” He doesn't hold up the line by engaging an actor in conversation while the rest of the audience waits to shake the actor's hand.

If he wants to be an even better patron, he'll spot someone on the theatre staff, approach them, and compliment the theatre before he leaves. He does not complain about the temperature in the theatre or tell them how to adjust their ticket prices.

Patron feedback is important, but not right after a show – these people just spent a substantial portion of their day at the theatre, and they're tired. The gentleman says that he enjoyed the show, that he'll be sure to come back, and that he's telling his friends to come see this play.

The Gentleman is the Best Theatre Patron

Live theatre can be first-rate entertainment, especially when attended with a gentleman. Though manners are supreme in public, some specific insight to the theatre world will distinguish a “fun guy” from a real gentleman.

Use this knowledge to impress those you're with at the theatre, and you will show them that you aren't just fun – you're a gentleman.