These are some of the things that come to mind when we think about aviator style.

As a pilot in the US Air Force I’ve always had a keen interest in aviators’ watches and I’m going to share my insights and observations to help you choose your ideal timepiece.

There isn’t any one style that defines an aviator watch.

In keeping with the forward thinking nature of the aviation industry, the type has grown and developed as new technology and new requirements have emerged. 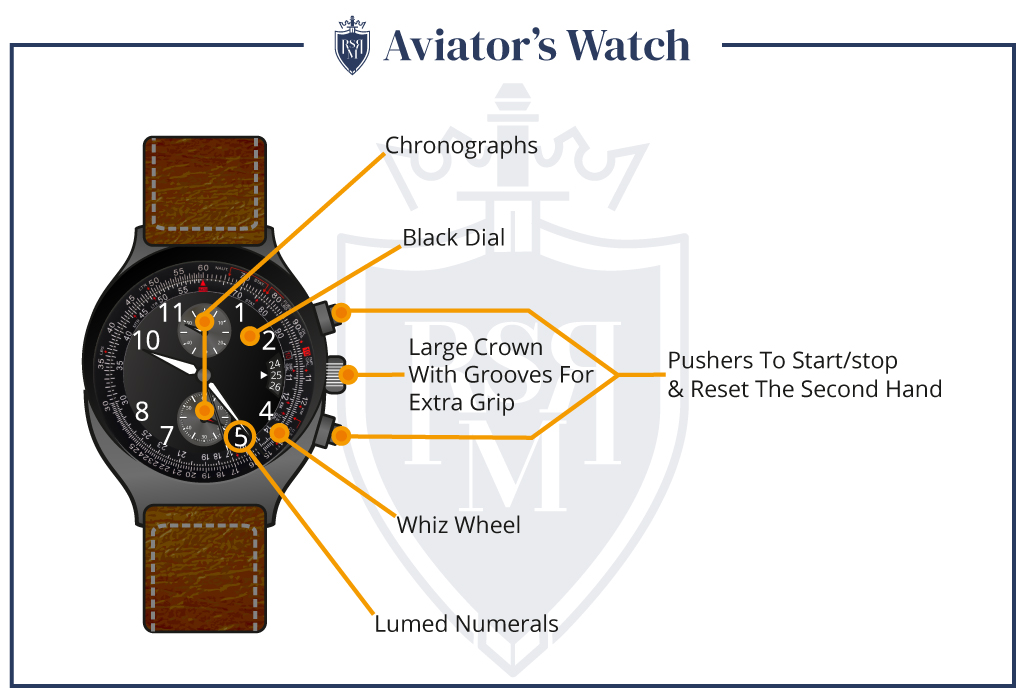 Origins Of The Aviator Watch

The earliest watches worn by pilots were simply repurposed field watches. They had to be accurate, of course and they had to be readable under low-light conditions.

Field watches, with their hand-wound movements and black dials with large white numerals satisfied both of these requirements.

Over time, air forces around the world began to develop watches with specific aviation functions.

In the 1930s the Luftwaffe developed the Flieger style of watches: the Type-A with simple numerals and delta index at 12 o’clock, and the Type-B with large minutes in the outer dial and hours in the inner dial.

The original Type-B was a massive 55mm and was issued to navigators who needed precise timing for dead-reckoning navigation: finding a target by flying solely referencing time and magnetic heading.

Three of the five original manufacturers still produce fliegers today. Laco, Stowa and IWC. They aren’t huge anymore though, they’ve been scaled down from the massive original watch. 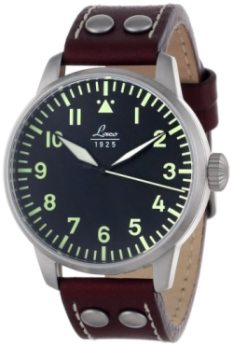 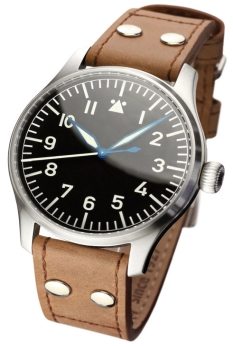 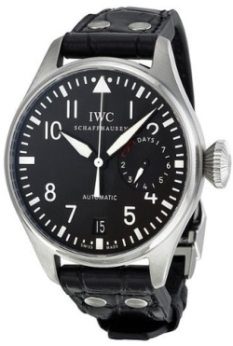 Stowa watches are only available directly from their website. They produce traditional Fliegers with Swiss automatic movements.

IWC is a Swiss luxury manufacturer. Their Fliegers are modern updates to the Type-A. Expect to spend between $4,000 and $15,000 for an IWC. 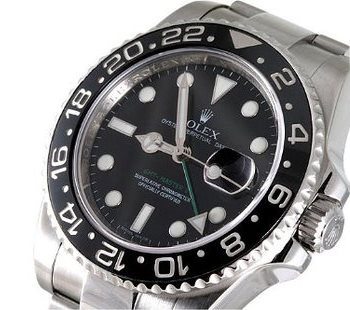 In the jet-age, as pilots found themselves flying across multiple time zones a new requirement emerged.

In order to standardize global operations, airlines and air forces began coordinating operations based on Greenwich Mean Time, aka GMT or Zulu time.

In response, Rolex developed the GMT Master II featuring two hour hands, one corresponding to the traditional 12-hour watch face on the dial and the other synchronized to a 24-hour bezel. 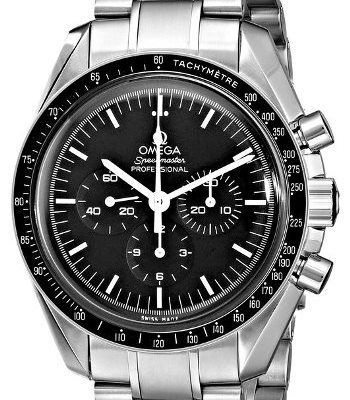 This allowed pilots to track flight time with the Zulu bezel and still use the local timezone while on the ground.

Once the space race got into full swing and astronauts became celebrities, watch manufacturers were quick to advertise the watches that NASA selected for use in space.

The most famous such watch is the Omega Speedmaster Professional.

Ed White wore his personal Speedmaster during the first spacewalk and NASA then selected it as the standard issue watch for the Apollo program.

Aviation watches can vary from super-minimal displays which provide a very quick read, to feature heavy watches which have a lot of complications. Citizen’s Hawk watches are definitely the latter.

The circular slide rule, or “whiz wheel” is a tool used by pilots to perform all kinds of time/fuel/distance calculations and unit conversions. It can be an extremely useful feature if you know what you are doing and knowing how to use one is a sign of credibility among aviators. 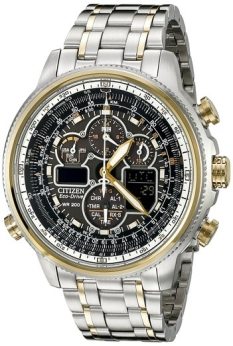 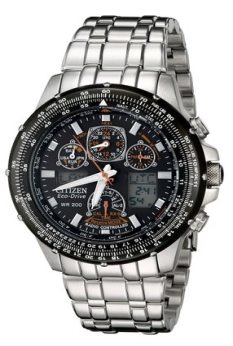 The Hawks are complicated, in fact some would say they are too busy. Their metal case designs and link bracelets or optional leather bands make them suitable for business and casual occasions, while their rugged design means they can stand up to outdoor or active use as well.

In my experience, airplane pilots tend to prefer Skyhawks, while the Nighthawk is favored by helicopter pilots. 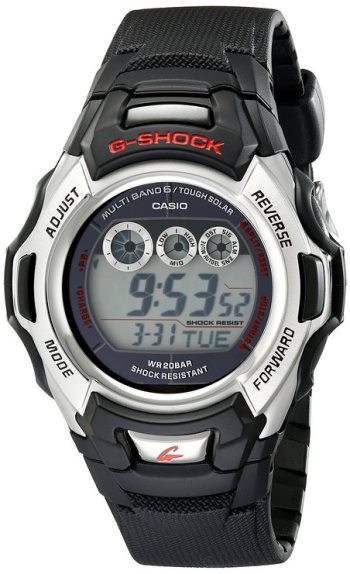 The Toughest Aviator Watch You Can Own

As far as digital watches go, there is only one name worth mentioning: Casio G-Shock.

The GW-500 is probably the most common watch in the US Air Force, worn by the majority of the pilots I’ve met (myself included).

It is extremely tough, solar powered, features dual time zone functionality and receives a radio time signal for the most accurate timekeeping available.

I bought mine in pilot training eight years ago, it’s been to Iraq and Afghanistan and is still going strong.

It is one of the most rugged looking watches around though and is only suited for use in the field.

There’s a new line of aviation watches that just launched. Wingman Watches was founded by Air Force fighter pilots who wanted a watch that spoke to the heritage of aviation, but with modern refinement.

They began with a Kickstarter campaign that reached it’s goal in less than two days and ended up with almost four times their original goal. Their site just launched and they are taking orders now.

The watches combine a streamlined, modern look with complications and design features evocative of classic pilot’s watches. They use Japanese quartz movements and are constructed with stainless steel cases and sapphire crystals. 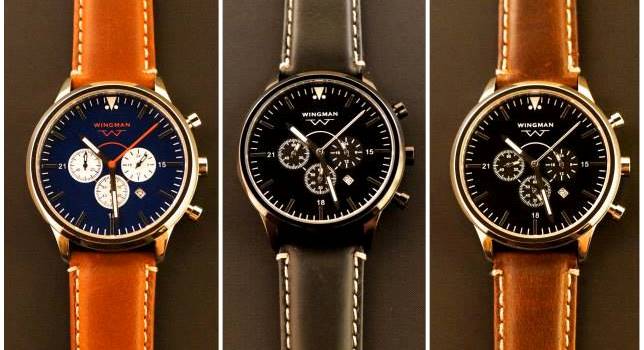 How to Wear An Aviator Watch

Most aviation watches lend themselves well to casual and business casual wear.

The watches, much like the pilots who inspired them, can be a bit ostentatious and inappropriate in more formal settings. Make sure you have the confidence to bend the rules if you choose to wear one with a suit.

Whether you prefer the simple utility of the Flieger, the cutting edge features of the Skyhawk or the history behind the Speedmaster Pro, there is an aviation watch to suit every man’s style.

Want to be like James Bond? Coming up next in this series we’ll take a look at dive watches.