This is a guide to the men's blazer and its wonderful versatility.

The men's blazer is by definition an odd jacket, or a jacket that has been cut separately without a matching pair of trousers, clearly differentiating it from a suit.

The blazer is a great way to add a whole new range of outfits by pairing them with anything from a pair of jeans to a different colored trouser like the gentleman has done on the right.

The great versatility of the men's blazer really shines when you have to go to more than one place in a day and don't feel like running home to change.

You can wear a blazer with gray trousers and a tie to work, and then remove the tie and throw on some jeans for a dinner date in the city.

Details Of The Men's Blazer

The first detail, albeit obvious, to note is that the blazer is not part of a suit. Never try to wear similar colored trousers with your blazer, the two garments won't be cut from 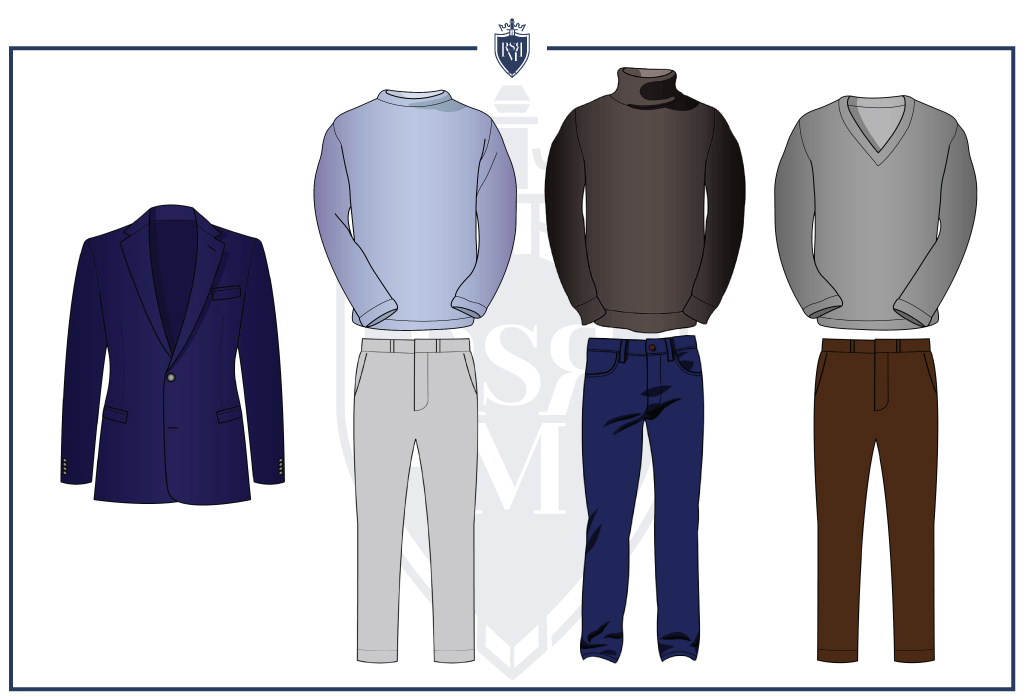 the same fabric and there is always a slight difference in texture or shade.

The color of a blazer really has no limits. However, a bright green blazer says a lot about you, and subtle and sophisticated is not what its saying.

Consider the clothes you have in your closet right now when deciding on the color of your new blazer. If you have lots of navy trousers, black pants, and blue jeans a gray blazer would contrast nicely with your bottoms.

If on the other hand you have lots of grays and dark wash denim, a subtle navy or deep blue would be ideal.

The young male professional must always be thinking about getting the most mileage out of all his purchases and considering his existing wardrobe is a great way to do this.

Among the details of the men's blazer is whether to get your garment in a single or double-breasted style. The double-breasted jacket is definitely a more formal jacket and you want to dress it up accordingly.

Because the two rows of buttons create an imaginary horizontal line and the front of the jacket is layered doubly, a double breasted blazer can give a thin man some added bulk. The single breasted is really the safer choice though when buying your first blazer.

When choosing the number of buttons, 2 or 3 remains the standard, only having 1 button or having more than 3 buttons is venturing into trendiness. Classic and timeless will get you the most bang for your buck, and saving money is always a concern for the young aspiring professional.

There are tons of other flourishes and subtle details that you can add that will make your blazer truly your own. This is especially true if you have your jacket custom-made by a quality company.

Some examples of custom details include ticket pockets, functional sleeve buttonholes (meaning the buttons at the ends of your sleeve can actually button your sleeve and aren't just sewed onto the fabric) and adding monogramming or a club emblem. Just make sure you're actually in the club or you might get funny looks.

When working in a business casual environment a blazer is a great way to stand out beyond the sea of “polo-shirt with chinos” syndrome you see in many offices.

An easy way to upgrade your outfit with minimal effort is to simply throw on a blazer on top of your polo-shirt. Throwing the blazer over your polo is also a good way to disguise an expanding belly by adding an extra layer on top of your shirt.

You can always dress up a blazer for work by wearing a crisp white men's dress shirt with a tie. A blazer and/or sports jacket's versatility really shines because of its casual nature. You can wear one to a BBQ just as easily as you could to drinks on Friday night.

The Purchasing Of Your Men's Blazer Or Sports Jacket

A gentleman needs two mainstay blazers in navy and gray. The neutral color stances of navy and gray allow for the combining of hundreds of different dress shirt, tie and trouser combinations.

When purchasing your jacket do not get trapped into confusing expensive brand names for quality. Often the marketing involved in brand management costs more than the actual garment.

The most important thing to consider is that the jacket fits well, the quality of construction and materials comes next, and least important is the name. This isn't to say you should ignore the name, as a respectable name usually means good materials and construction.