Want to know one of the biggest turn-offs for women?

As a woman, I can tell you that it’s when a man cares about what other people think.

There’s nothing worse than a man who can’t make a decision.

Or a guy who can't be who they are because they’re worried about how they’re perceived.

Women love men who pave their own way, take charge and have confidence.

I can confidently tell you that because I’m a woman 🙂

But it’s easier said than done.

Not many people can genuinely say they don’t care about what other people think of them. How many times do you catch yourself thinking:

As you’ll learn today, as humans we’re conditioned to think this way. It sucks. But there are ways that you can get around constantly worrying about this.

Today I’m going to give you three strategies you can use to finally stop obsessing about what others think of you so you can be who you truly are.

This is a guest post by Katrina Razavi, communication coach and founder of CommunicationforNerds.com. If you liked this article, visit her site to sign up for a free three-video mini course called: How to Shut Up that Inner Voice & Beat Awkward Conversations.

Click Here To Watch The Video – Stop Caring What Others Think

Why do we care about what others think?

Before we get into the nitty-gritty strategies, let’s talk about why we think other people’s opinions matter. Unfortunately, it’s been hard-wired in our brains thanks to our ancestors. Back in the hunter-gatherer days, being part of the “in-group” meant life or death.

If those around you didn’t like you, you ran a risk of not getting access to food or shelter. Being an outcast basically meant death.

Although times have obviously changed, those neural pathways are so hardwired in us through our evolutionary history that it’s hard to shake. We’re still worried about what others think and how they're judging us.

God forbid we’re not part of the “in group!” That’s why rejection and feeling “left out” is so hard to cope with.

Basically, when our brain is “at rest” the network that gets activated is the one that looks at who we are, our social standing and how we compare to others socially. UCLA neuroscientist Matthew Lieberman says that, “The social nature of our brains is biologically based.”

In essence, the natural state of the human brain to consider our social standing.

It’s no wonder why it’s so hard to beat this frame of mind. But it’s not impossible.

Now that you understand the science behind this, here are three strategies that you can begin developing to help you get over caring what others think of you.

Strategy #1: Realize that Most People Don’t Care About You

You’re walking down the street and trip over the curb.

What’s your first reaction? To downplay the trip right? You sort of wobble, but catch your balance and begin walking like nothing ever happened.

You assume that everyone on the street saw you, so you don’t want to be too obvious that you totally missed the curb in front of you.

Well here’s the thing. Most people didn’t even realize what just happened.

In a fascinating experiment, college students were randomly chosen to arrive late to a class full of students taking an exam. The student who walked in late was wearing a ridiculous t-shirt with Barry Manilow’s face on it.

Would you want to do that? I didn’t think so.

Anyways, when the students enter the class, the teacher singles them out and asks them to wait outside for a moment. As they’re waiting outside they’re asked how many people who were in that room could identify who was on their shirt. In other words, “do you think anyone noticed your ridiculous t-shirt with Barry Manilow’s face on it?”

Only about 25% of people in the room actually noticed.

The takeaway here is that participants vastly overestimated how many people noticed them. If you put yourself in their shoes (or t-shirts), the judgment makes a lot of sense—if you were made to walk into a room wearing an embarrassing t-shirt, you’d also think everyone noticed. But the reality is not nearly what we think it is.

How to Realize Others Don’t Care

Whenever you find yourself second-guessing how you’re being judged, simply remind yourself of Barry Manilow. What better cue to help remind you that people don’t really notice every single them that goes on around them?

I know this sounds sort of silly, but it’s a fun way to break your mental pattern which is exactly what you need to do when you start thinking negatively.

When you realize that other people don’t really care all that much about you, it will help lessen the importance that you put on other people’s opinions.

The reality is that people have their own problems to deal with, they’re worried about their jobs, families and finances. Most people don’t have the bandwidth to care about other people. The sooner you realize that not every single person in the world is analyzing every move you make, the more content you will feel.

How often do you find yourself scrolling Instagram, admiring photos of friends in exotic vacation spots or driving fancy cars? It can be addictive, but it can also be demoralizing. It can make you feel like you’re not “good enough” or that you haven’t “made it.”

A recent University of Pittsburgh research study surveyed, 1,787 Americans aged 19-32 and found that the more time they spend online the more likely they are to be depressed. One of the takeaways from the study was that “exposure to highly idealized representations of peers on social media elicits feelings of envy and the distorted belief that others lead happier, more successful lives.”

Translation? The more you see these “perfect” lives of friends or celebs on social media, the more envious and less content you will be.

Because here’s the other thing: comparing yourself to others is totally relative.

Well, the study showed that the bronze medal winner scored a 7.1 compared to the silver medal winner who scored a 4.8. So why the disparate difference here? The researchers called this phenomenon “counterfactual thinking.”

Another related study by SFSU found that silver medal winners were more likely to display emotions of contempt and sadness more so than other medal winners because of this same exact model of thinking!

How to Stop Comparing

So what’s the takeaway here? Firstly, comparing yourself to others who have “more” than you is a losing strategy. You’ll only feel envious, depressed and upset. One thing you can do is limit time on social media, I like an app called RescueTime that allows you to track what sites and apps you use most.

Another positive action you can take, is to exercise gratitude. This may sound cheesy to you, but people who are grateful lead happier and longer lives than those who don’t.

Simply being grateful for the things you do have will allow you to feel more grateful and looking at the brighter side of life.

I like to start every morning by listing out at least three things that I’m grateful for. I like to make at least one of them something super minor like running water, having a roof over my head or a car to drive. It helps put things into perspective.

Remember, if you have internet access to read this, you’re lucky

Strategy #3 Define your own Happiness

I don’t know about you, but I’m sick and tired of social networks and the media telling me what will make me happy. “Success” always seems to be based on external things like cars, clothes, and toys. But do all those things truly make you happy?

Likely not, this Princeton study shows that after a certain salary amount, money can’t really make you much happier. After a certain level of comfort, money doesn’t mean all that much.

Rather than modeling your definition of happiness based on what the media or other people think, get clear about what happiness means to you.

This can be a difficult exercise, it’s easy to fall into the trap of thinking what you see on TV will make you happy, but I urge you to think hard about what would truly make you happy.

I can tell you from firsthand experience that the superficial things you think would make you happy, actually don’t.

A few years ago, I got my “dream job.” It was the highest salary I had made up until that point, I had huge clients and traveled for work.

A few months into the job, I realized I hated it. I was constantly working, I was never home and I was unhappy. In fact, I was so unhappy that even if they doubled my salary I still would have left.

I was not happy internally.

At that point in my life, I thought I knew what would make me happy, but I didn’t. It was a hard lesson learned, don’t make the same mistake that I did.

How to define your happiness

Take some time to reflect on what happiness means to you.

Here are a few questions you can ask yourself to begin defining your own version of happiness:

When you’re personally happy with where you are, you’ll stop caring about how other people are judging you.So define your own happiness rather than trying to emulate what you see in the media. 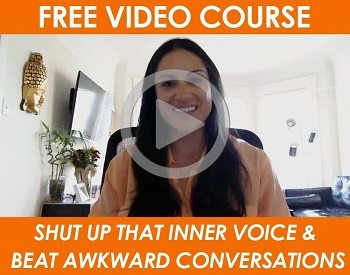 The only person responsible for your happiness and contentment is yourself. Don’t let other people’s judgments get in your way. When you allow other people’s opinions affect how you feel, they win.

By using this 3-step process you will improve your confidence and stop giving a sh** about what others think.

Katrina Razavi, communication coach and founder of CommunicationforNerds.com. If you liked this article, visit her site to sign up for a free three-video mini course called: How to Shut Up that Inner Voice & Beat Awkward Conversations.

It covers six secrets to social confidence, the #1 strategy to improve your life and how to have natural conversations.

Previous Post: « Squared Vs. Curved Toe Shape Dress Shoes | Which One Wins? | 3 Pros For Square & Curve Toed Shoes
Next Post: Men’s Restroom Etiquette Infographic | How To Pee In Public Like A Gentleman | Bathroom Rules For Men »