This is how I describe the semi-brogue.

Why is subtle important?

Because it allows for versatility and interchangeability.

Semi-Brogues are the perfect balance between being noteworthy and refined.

Ever wanted to get away with wearing the same shoes every day?

The semi-brogue allows you to do just that.

These shoes are perhaps the perfect business casual shoe.

Historically, “brogue” refers to the perforations on a shoe that were originally intended to drain water from the feet of peasant workers in the Highland marshes of Scotland and Ireland.

That's right, these were the original crocs!

In the present, the perforations are strictly aesthetic.

Basic characteristics of the brogue shoe:

Over time, various designs of brogues have evolved although only a few grabbed mainstream attention.

The most available brogue styles include the full brogues, semi brogues, quarter brogues and long-wing brogues. The distinguishing factor in each style is the toe-cap.

Any or all of these can also sometimes (but not necessarily) feature decorative edging or serrations along the seams, particularly the toecap seam.

The focus of this article is the semi-brogue, or half-brogue style – perhaps the perfect business casual shoe. 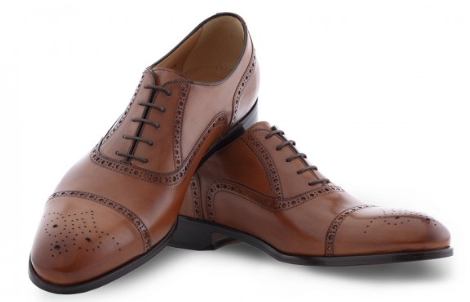 If you had to consider a formality scale for shoes, semi brogues would occupy the middle-ground.

What Are Semi-Brogue Or Half brogue Shoes? 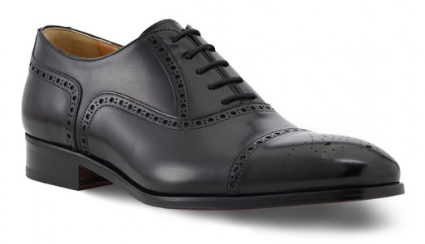 The half-brogue was made famous by the legendary John Lobb, who introduced the shoe as an Oxford in 1937.

The style was produced to offer clients a middle ground between the bold design of a full brogue and the rather plain quarter brogue.

Characterized by a toe-cap, a semi-brogue shoe has decorative perforations and serration along the cap's edge, along with additional perforations on the heel and often times the center of the toe cap.

The perforations on a semi brogue cover the entire toe cap’s edge. The unfussy decoration is appealing and adds classic simplicity to your outfit.

These are shoes that subtly add to the overall stylishness of your outfit without attracting too much attention to your feet.

Until the early 1900’s, brogues were considered a casual shoe. Traditionally, they were designed to be outdoor footwear.

Brogues were not intended for casual or business occasions. Over time, they were adapted as walking shoes for country gentlemen.

The modern use of perforations solely for decorative purposes has allowed the brogue to be viewed as business casual and in some cases, even formal footwear.

The formality of a brogue is inversely proportional to the broguing.

A shoe is less formal the more broguing it has. Semi-brogues are more formal than full brogues.

How to Wear Half Brogue Shoes 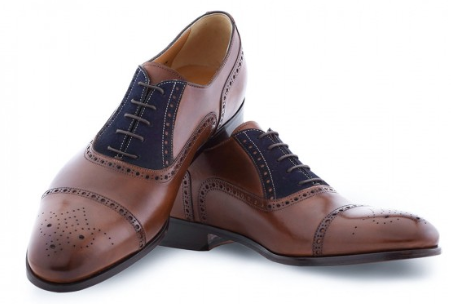 Since semi brogues occupy the middle ground between the plainer design of a quarter brogue and the extravagance of a full brogue, they are suited for both business and casual occasions.

The lighter weight of the half brogue makes it a more elegant choice than a full brogue, while escaping the stark formality of a plain or quarter brogue oxford.

Materials For Half Brogues

Brogues are most commonly made of box calf leather, with varieties now produced in other kinds of leather, including suede.

The half brogue style is best presented in a smooth or uniform leather that makes the broguing shine.

Exotic leathers are not suited for brogues as the grain tends to overpower the decorative perforations.

Whether you are a ‘jeans and polo' kind of guy, or your preference leans towards sports jacket and colored suits, a pair of semi brogue oxford is a versatile pick.

Dress it up. Dress it down. These shoes are the perfect foundation to build a smart business casual outfit.

Previous Post: « A Definitive Guide To A Man’s Interchangeable Wardrobe For Hot Weather | Dressing Sharp In The Heat
Next Post: Career Stuck? One Mistake Holding You Back & 5 Tips To Break Free »