When I was in the Marine Corps…

Our staff sergeant would call us “nasties“

Apparently… we had lots of issues we needed to “clean up“

Now as men… we deal with some “nasty” issues too.

And trust me – women find them appalling.

You know what I'm talkin' about.

Yeah trust me – she doesn't find those attractive…

So what's the solution? 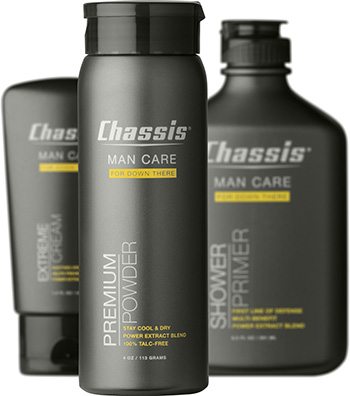 These are 2 issues that the majority of men always face – and don't like to admit it.

Swamp crotch has another name called stinky balls syndrome. Any man is vulnerable to this condition, especially in warm and humid environments.

That pungent smell from your balls/butt creates problems whether you're working out, getting intimate with a woman or even sitting down by yourself.

But why does that part of your body tend to stink more than the rest? Unfortunately, it's in our biology – where two types of sweat glands happen to be highly active in your groin.

And whenever there's sweat, bacteria come around and break it down – causing your genitals to smell.

But chafing thighs are another big factor (and they're already a separate issue). Not only do folds on your thighs look sickly and unattractive. When they rub against each other – “little pieces of dead skin cells fall off” and become a food source for bacteria or yeast.

Therefore it's better to dress in boxers or boxer briefs – as many briefs tend to “constrict” your balls and provide less breathing room. Cotton is the ideal fabric for your underwear since it wicks away any moisture that may irritate the skin.

The Best Solution To Swamp Crotch?

And then we have Chassis – a men's care brand which I think offers the best antidotes in the market.

What's so great about this company? First, they sell this special type of powder for the crotch – designed to work like deodorant for the crotch area. It takes seconds to use, but it provides an all-day peace of mind – knowing that your balls aren't going to stink wherever you go.

You will only notice a fresh, masculine scent produced by the powder. No itching or discomfort in that area whatsoever. But here's the #1 benefit Chassis offers you – confidence. A consistent level of confidence whether you're in the office, going on a date or cheering loudly at a ball game.

Men make it a daily habit to deodorize their armpits or powder up their torso – but many don't think of doing the same “down there.” Some have already figured out the benefits of doing it, while the rest think it's normal to have those guy problems – and take no action.

But Chassis's Premium Powder has the answer for all guys. Its hydro-shield technology lets it absorb sweat and moisture without forming a sticky paste like other powder types. It's also free from harsh ingredients such as aluminum, talc, menthol, and parabens. Instead – you enjoy a nice blend of herbal extracts like pumpkin seed, oatmeal, and even hops from your favorite beer (which is fantastic for your skin).

Aside from their Premium Powder, you can also try the Chassis Shower Primer (which deep cleans, deodorizes, moisturizes your skin – plus softens your body hair) or the Chassis Extreme Cream (which quickly relieves the effects of chafing under extreme situations).

Whether you're running a marathon or playing 36 holes at the golf course – Chassis products will provide the cleanliness, confidence, and comfort you need to get through the entire day.

Athlete's foot (tinea pedis) is a type of fungal infection in the soles of your feet and spaces between your toes. It can cause the skin on your feet to peel, crack, get itchy spots or blisters.

We have the Trichophyton rubrum (T. rubrum) fungus to thank for that. It's said to have originated from certain parts of Africa, Australia, and Southeast Asia.

So how has it managed to come all the way to the U.S. and the rest of the planet? It's simple – globalization. Our world is more connected than ever because there are countless ways to travel.

And when you combine that with the fact that many use occlusive footwear these days – it's no surprise that T. rubrum continues to create problems for people. But don't worry! It doesn't take much to combat athlete's foot, especially in its early stages.

You can treat this infection at home using an antifungal cream or medicine (which kills the fungus or slows down its growth). But in terms of prevention, it's important to follow these good practices:

People say you can tell a lot about a man by the shoes he wears. But let's get real – anybody can show off a nice pair of Oxfords or Chelsea boots. And the ladies know it. That's why they'll care more about how you look barefoot.

And unless you got yourself a pedicure – when a woman looks at your bare feet, what she sees is what she gets. So if she notices black or yellow toenails… eek!

There are mainly 2 toe-related conditions that every guy should watch out for:

So just like any other kind of infection – it's better to notice the early signs of those conditions and treat them immediately. If you've reached an extreme stage of either one, it's much harder to treat.

Certain antifungals/medications are still going to lessen the pain and side effects. But keep in mind that even if the treatment is successful, nail fungus tends to come back soon after. That's why you should follow the same practices mentioned in problem #2 (for athlete's foot).

This is the technical term for horrendous body odor. This is where skin bacteria combine with the fatty acids and testosterone produced by sweat glands – forming this extremely smelly sweat.

If you suffer from bromhidrosis – you might see people around you gagging, covering their noses, or turning their heads away. They may or may not do those things discreetly. But either way, your reputation goes out the window… and for quite some time.

Unfortunately, bromhidrosis is a genetic thing. Some men are just unluckier than others – and smell bad in a couple of hours after showering. If you're one of them, my advice is to consult your doctor or change some parts of your diet.

Also, stick to these hygienic practices to limit the effects of bromhidrosis:

You might also want to consider topical therapy such as electrolysis – removing hair from the roots through heat and electricity. This will help minimize the breeding grounds for bacteria in your body.

You can also explore topical antibiotics like erythromycin and clindamycin – which target bacteria directly and stop them from growing.

Here's a fact that many guys don't realize most of the time.

It's interesting, especially when you compare 2 of the most popular fabrics these days: cotton and polyester. There was this one experiment done by researchers from the University of Alberta – using a special kind of t-shirt that had cotton on one side, polyester on the other.

Dozens of people (as test subjects) would smell the shirt – which was unwashed and had either the scent of tobacco or body odor. And the result? About 80% of the raters thought the polyester side smelled worse than the cotton side.

It turns out polyester is better at retaining the chemicals associated with pungent smells and body odor. The polyester side kept having a stronger smell than the cotton side – even after the shirt got washed.

Does that mean you ought to avoid polyester from now on? No. But you should make it point to identify which clothing pieces are most prone to smelling bad.

As much as possible, don't leave those clothes in the hamper damp. Soak them in vinegar and salt to neutralize the odor. Try a “sport” detergent to wash your laundry as well (especially for activewear).

And let's not forget shoes that fall victim to sneaker stench. Shoes are likely to smell bad thanks to the sweat and bacteria all over your feet (especially during hot days). They also have the added issue of molds – which start forming when your footwear isn't thoroughly dried.

The solution? Use antibacterial and antifungal sprays regularly. Wash the shoes in hot water whenever possible. And while they're drying off, stuff them with old newspaper to help speed up the process.