Here's a thought to brighten your morning ritual of slipping on neckwear:

You're taking part in a manly 2,200 year-old tradition.

A tradition that many of history's greatest warriors, statesmen, and artists partook in.

That's right – the scarf (or variations such as the necktie and cravat) have been in our wardrobes for over two millenia.

Let's start at the beginning.

The first men's neckwear we have solid historical evidence for was worn by Chinese soldiers in the 3rd-century B.C.E.  The terracotta soldiers buried with Qin Shi Huang, the first emperor of unified China, can still be seen wearing tied neck scarves.  These were used to denote rank in a form of early military insignia.

The terracotta soldiers buried with Qin Shi Huang, the first emperor of unified China, can still be seen wearing tied neck scarves.  These were used to denote rank in a form of early military insignia.

Chinese art from still earlier includes depictions of both men and women wearing fringed, rectangular pieces of cloth similar to scarves, dating back as early as 1000 B.C.E.

A band of linen cloth known as a “sudarium” was part of a standard gentleman's costume in the late Roman empire.

It was worn around the neck or knotted around the waist in the first century C.E. Emperor Nero (among other peculiarities!) wore a sudarium around his neck during almost all public appearances, and is even depicted with it on some coins from his reign.

Soldiers in the Croatian military used scarves to denote rank, much like the early Chinese.  Historians do not know when the practice started, but it gained fame when Croatian soldiers impressed the French court of Louis XIII in 1636.

By the reign of Louis XIV the neck scarf was a staple of the French court.  They were named “cravats” after the Croats that had introduced them.  Many paintings of noblemen at the time, including Louis XIV, include a brightly-colored cravat.

The style was spread across Continental Europe by military men, and was brought back to England by King Charles II when he returned from exile in 1660.

The Battle of Steenkerque:  Beginning of the Modern Necktie

The Battle of Steenkerque in 1692 is remembered more for its fashion significance than its military impact:  the French army (led and heavily populated, at the time, by noblemen and gentlemen of class) was surprised by opposing forces, and the young men went into battle with their cravats hastily tied one end over the other rather than being done up in an elaborate bow.

The result was the “steinkirk,” an Anglicized spelling of the battle and the prominent form of menswear in England for a good thirty years after the battle.  It replaced much larger and lacier cravats with a simpler knot and plainer cloth.

The ends were twisted together and tucked through a buttonhole, creating a shape much more like our modern necktie.

When Ludwig von Beethoven set out to woo Therese Malfatti in 1810 he adopted a new personal style, which included silk scarves to go with his new suits.

Queen Victoria of England was a great proponent of fashionable accessories, including scarves for both men and women. Neck scarves and cravats became a status symbol, with the material and even the knot of your neckwear indicating your social class.

Around this time coachmen and drivers also popularized the familiar “four-in-hand” knot as a way of tying their scarves while still holding the reins, i.e. the reins to four horses in one hand while you tie your scarf with the other.  This is still the knot many men use for their necktie today.

Burberry, still a source for iconic neck scarves, was founded in 1856 (though their distinctive tartan pattern was not created until the 1920s, and even then began as a jacket lining rather than a scarf pattern). 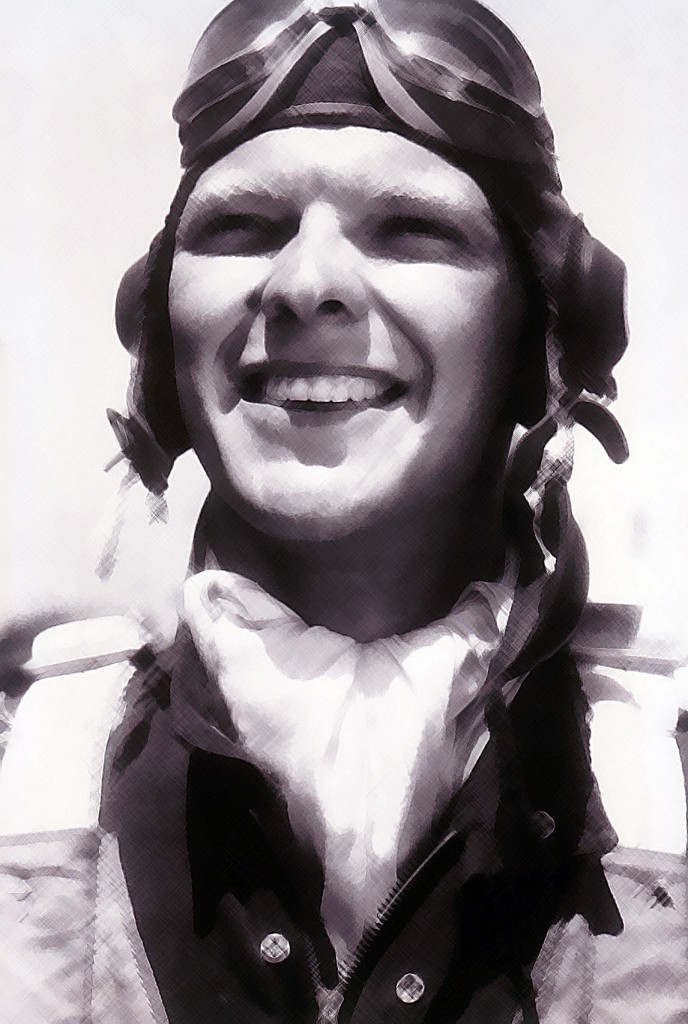 By the First World War scarves were a staple winter garment for men. Knitting them was a patriotic chore encouraged in both America and Great Britain during the war.  Art from the time depicts soldiers wearing scarves in the trenches (the iconic trenchcoat, fittingly enough, was also designed by Burberry for the war effort).

Early aviators considered scarves essential flight equipment. They provided warmth at high altitudes and needed padding when pilots craned their necks back and forth to scan for other planes.  Scarves enjoyed popularity among young men in the 1920s and 1930s partly because of their military origins and most likely – as is today, their ability to transform an outfit from mundane to striking.

In Summary – The Scarf & History

The man's scarf has been replaced as an item of daily business wear by the necktie. Scarves are now an accent for men who choose them rather than a necessity that signifies your rank or class status.

The few associations left range from the ultra-formal white scarf worn over a tuxedo jacket to the striped scarves of clubs – although these are becoming more and more rare.

So while neckwear is a daily chore for some men, it is also a tradition dating back before the birth of Christ. So tie a manly scarf with confidence, knowing that over 80 generations before you have done so with gusto. And that's something to cheer you up in front of the mirror each morning.

Previous Post: « The Style System Redirect
Next Post: How Your Entrance on Stage Can Affect Other People’s Perception Of Your Performance Video »