Whether they be chain wallets or square shoes, some men insist on making poor style choices.

Some went out of style as late as last year, some were never in style to begin with. 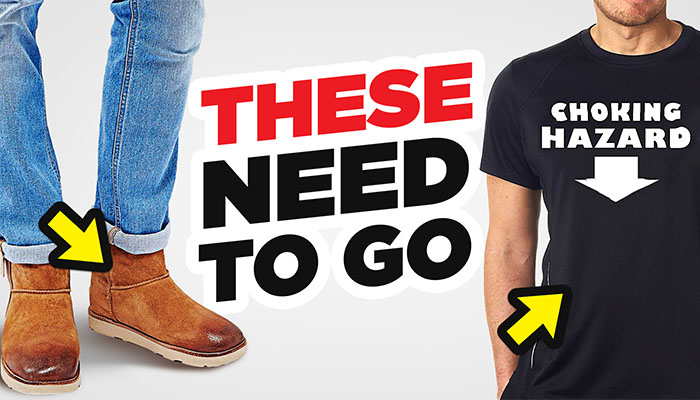 Are you making the same mistakes? Today, we're covering ten things that are totally out of style (and what to replace them with).

This article is brought to you by Anson – makers of revolutionary micro-adjustable holeless belts that fit any waist up to 50” perfectly. Plus they come with interchangeable buckles and straps, in premium full-grain leather and some great vegan options.

I recommend the Gift Box, which lets you create 6 different strap and buckle combinations. That’s SIX complete belts for just $99.95. With free U.S. shipping and a lifetime guarantee, it’s a no-brainer – click here to upgrade to Anson belts.

We saw man buns as a traditional haircut in Medieval Japan – most commonly used by Samurai.

We are not in Feudal Japan anymore, gentlemen. The man bun has garnered a reputation of belonging to pretentious, overly-sensitive men. Though there isn't anything objectively wrong with wearing your hair that way in casual settings, is it worth the stigma?

Skinny jeans are especially heinous. The trend takes bad fit and makes it a fad, meaning that looking two sizes too big in the legs is popular.

Throw those skinny jeans away and pick something that matches your body type – it's easier than you think. Skinny? Opt for slim-fitting jeans. More athletic men could do well with a straight leg, while larger men benefit from using a more relaxed fit.

That time is long gone. Unless you are going for a run or looking to get some exercise in, forgo it entirely.

This is often used by men inspired by Rap or Hip-Hop, but where does it originate?

Prisons, gentlemen. Prisoners were not given belts, resulting in sagging trousers and a habit carried on by these men well after their release.

Sagging pants only make you look like a slob.

It's a look worn with pride, but it has a sketchy history aside from the fact it looks plainly bad. It's out of style – avoid it.

Leather belts get worn out after a while thanks to the constant pressure inflicted by the buckle. It's important to keep up with a fresh new belt because if not, people will notice the damage and your style stats will plunge.

You know it if you've seen Scarface. Popped collars were staples of the 1980s… but not anymore. This was a fad that is certainly not in style anymore, so keep those collars beneath the jacket.

This trend emerged in 2005 and has long since dissipated. There is one notable exception (In western culture) to this rule, however, and that is the Guayabera.

Traditional Guayaberas originated from Cuba and are known for their heavy embroidery on the front running on either side of the placket. Such shirts are suitable for most men in the summer.

The Guayabera is a rare example of a timeless piece that uses embroidery.

Nevertheless, do not go beyond this – avoid it on regular shirts and jeans.

Hailing from the 1990s, this trend was embodied by celebrities like David Beckham. Since then, he's moved on to well-tailored suits and classic style.

He's moved on since then, but some men haven't. We still see guys sporting this ridiculous look. It is either through ignorance of the right fit or because they genuinely believe they (somehow) look good.

Once again – this is out of style, gentlemen. Know what clothes fit you and stick to it.

Ah, the infamous Cargo shorts. This is the hallmark of the American man that has yet to discover his potential.

Cleaning out your closet? Dump the cargo shorts first.

Cargo shorts are a better fit for boys, not men. If you own them, discard them immediately. Instead, opt for a pair of Chino shorts that end just above the knee. It's a classic way to be comfortable in the summer.

This sprouted with the booming biker culture in the 1950s. You still see it nowadays with men who love the outlaw or the rocker vibe. While it may deter thieves, it won't help your style.

Stick to tradition – get yourself a nice, clean leather bifold wallet. If it's secure in your pocket, you might actually be less likely to have it stolen without a giant change advertising it.

Summary – Out Of Style Items

Gentlemen, there are just some things that should never be worn – especially if they've been out of style. Remember to stick to the classics and never be a slave to fads.

This article is brought to you by Anson – makers of revolutionary micro-adjustable holeless belts that fit any waist up to 50” perfectly. Plus they come with interchangeable buckles and straps, in premium full-grain leather and some great vegan options.

I recommend the Gift Box, which lets you create 6 different strap and buckle combinations. That’s SIX complete belts for just $99.95. With free U.S. shipping and a lifetime guarantee, it’s a no-brainer – click here to upgrade to Anson belts.

Previous Post: « How To Apply Cologne The RIGHT Way: Mastering Men’s Fragrances
Next Post: Quality Suits On Amazon | How To Buy A Suit Online »