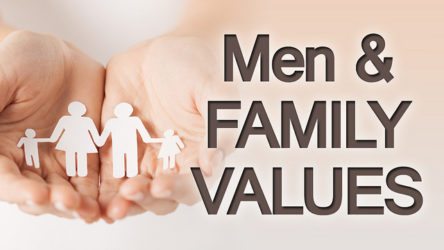 This post is based on the video – 12 Family Values | Using Values to Motivate, Direct, & Succeed In Life

This is something that I've shared with a few other people. People are always like “Wow! That's a pretty good idea.” I didn't think it was anything novel.

I had read about this a while back. I'm a student of philosophy. It was actually one of my majors in undergrad.

I'm a big believer that the mind leads the body and that we need to think through these things. We need to have, in a sense, rocks in our life. We need to know what we stand for.

When I first joined up in the Marine Corps I got a little card that said, “Honor, courage and commitment.” It's funny. In my family values, two of those are still there. I'm going to have a PDF copy of this but I would recommend that you take my PDF copy and you create your own family values. You guys are watching this from all over the world.

The six-year-old and the 10-year-old, we've gone through this multiple times at the breakfast table. We talk about what do these mean.

Courage is you would think the easiest one to be able to understand. If your courage, you fight dragons or you go into combat. I'm not talking about that type of courage. I'm talking about moral courage, the ability to do what you know to be right when no one else is looking or when you're in a situation that everyone else seems to be doing something else.

I'm really proud of my son. He wasn’t hanging out with a buddy for a while. I asked him “What's going on here?” He basically said, “That guy is a bully. I've seen him push people around. I've had to confront him about this. We’re just no longer friends because I had to do that.” I thought that that was pretty neat. This guy is a little bit bigger than my son.

My son can take care of himself. He's a pretty tough guy. He goes to the gym every morning with me. What I really like is that he realized this person, what he was doing, wasn't fair, wasn't friendly, and really was against our family values. He had the courage to confront him.

Often times we go through life and we don't stand up for things we believe in. I think you need to have the courage to do that.

Point number two: Commitment. Commitment is simply when you don't feel like doing something you've got a follow through. When you’ve got a goal, you need to realize that it's going to be that — for me and my son, getting up at 5:45 in the morning and going to the gym.

When it's freezing cold outside here Wisconsin, we don't want to get out of bed but we still do it because one of the goals was to get him to state in swimming. We realized that we had to go to the pool every morning and practice his strokes if he wanted to make it to state. You've got to be committed to the goal. You’ve got to be able to put in the time and the effort.

Hard work. I'll just the example of snow in my driveway. Yes, I could have a truck come in and plow it out. They do a pretty good job. For a few years I had that. When my son got at a certain age I felt it was important that we actually go out there and we do that as a team. It does take an hour and it is a pain in the butt sometimes.

However, I would have to say that it is hard work. That's what I wanted to instill in my kids, is that there is no substitute for sometimes putting your head down and getting the work done and putting forth the full effort. 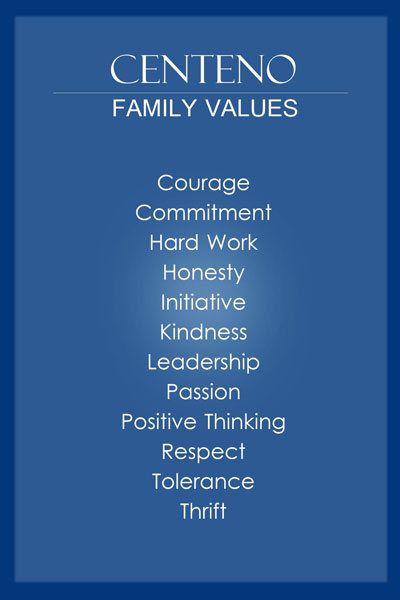 Now, let's talk about honesty. So honesty, it's not just being true to others. I'm not talking about little white lies here. What I'm really talking about is being honest with yourself.

This is one of the hardest things because often times we fool ourselves into believing that we’re better than what we are, we’re overconfident, or that everything is going to be all right when it's not necessarily going to. You've got to have the fortitude to be honest with yourself and say, “I need to start doing this or I've got to change what I'm eating because otherwise I'm not going to live that long.”

This is one of the hardest things because often times we fool ourselves into believing that we’re better than what we are, we’re overconfident, or that everything is going to be all right when it's not necessarily going to.

You've got to have the fortitude to be honest with yourself and say, “I need to start doing this or I've got to change what I'm eating because otherwise I'm not going to live that long.”

So let's get to initiative. Initiative is doing what needs to be done without being asked to do it. I look at my kids and they go out there and they take the initiative, sometimes they don't but I'm always telling them.

Okay. Kindness. This is something I debated whether or not to have it on there because what does it really mean. When I explain it to my kids, it's actually taking care of those that, in a sense, can never pay you back. That's, I think, one of the true marks of a gentleman is that he gives to those and he puts forth the effort to help those who just can't repay them. To me, that's what kindness is.

Leadership. So leadership, pretty simple if you think about it but it's different than being a boss. I love my daughter, Svetlana, but she is a bit bossy. I've tried to explain to her and I've seen her start to step up. In fact, a good example, ice skating the other day. She's a great ice skater, Badger State champion at the age of six, two years running. She gets out there and she does spins. She's really good on the ice skates. There are tons of girls, many older than her, who cannot skate the level she can.

Passion. So I'll get down to my daughter Arianna. She's passionate about everything. She wakes up in the morning. She's passionate about her babies, about her dollies, about giving me a hug, about the fact that there is cartoons going on, the fact that we’re eating something great for breakfast. Try to have passion in your life. I love what I do here at Real Men Real Style. That's what keeps me motivated. You got to have passion in your life.

Positive thinking. All right. So I am an optimist. If you're a pessimist, research has shown that you are going to have a little bit harder time in life. I always try to find the silver lining because when it comes down to it, we are incredibly fortunate. My wife's grandmother spent a couple of years in a Nazi work camp. That kind of always puts things in perspective for me. Her saying was at least there is no war. I have to agree. Unless you are in a combat zone, you’ve got to a lot to be thankful for. If you're healthy, if you've got the means to feed yourself, if you're relatively young so that you can improve your life, you should be positive about that.

Respect. Now, respect is something that we show to people who have earned it. I try to work with my kids about this, that they always call men sir, women ma’am, but it's something that you need to show, not just respect for those that are older, but those that have put in the effort because sometimes you're going to be put in a situation that you're working under someone that's younger than you but you still need to show them respect especially if they've earned their stripes. It's something that I think we just need to look at what that person has to offer.

Tolerance. Okay. So we live in a big world. There are tons of religions out there, tons of different viewpoints. I think one of the problems that we have in this world is that there is a lack of tolerance. I'm not saying that you’ve got to accept what that person is saying but you should be open to listening to them and letting them express their point of view.

Finally, thrift. So what I mean by thrift is not being wasteful. You're not going out there and spending money that you don't have. You're not out there buying things that you don't need. And you're not wasting what you have. We've got a limited amount of resources on this planet. I try to impart on my kids and my family that we need to take care of what we have.

So hopefully you found this useful. I would love to hear from you guys in the comments down below. Go grab the PDF I've created for you over at Real Men Real Style. I'll link to it down below. Take care. Bye.

This post is based on the video – 12 Family Values | Using Values to Motivate, Direct, & Succeed In Life

Previous Post: « 3 Reasons Why You Should Visit Sharpologist | StyleCon Speaker Series Video
Next Post: What Colors Should Be In A Man’s Closet | Color Percentages In Your Wardrobe »