How often do you get criticized for your style?

How does it make you feel?

Of course – most people's opinion don't matter, but what about friends & family?

Your closest pals rip into you at the fact that you upped your style.

Just when you're feeling confident about a positive change, someone tries to bring you down.

It’s inevitable – being criticized for how you’re dressed.

You can’t seem to please everybody, not all at once.

Whatever people’s concept of perfect is, it’s unattainable.

Maybe that’s the way it is. Perhaps we’re supposed to just handle our critics as they come along, whatever way we think best.

Should we be defensive? Or shoot back with a witty, sarcastic remark?

Let’s take the high road instead, guys. Channel the gentleman in you by following these five tips in facing criticism – whether coming from brutal honesty or arrogance – towards your style.

1. Understand It's A Reflection Of Them, Not Necessarily You

A lot of times, the fact that somebody’s criticizing has nothing to do with you, and everything to do with them. It could be an inferiority complex. They could be turned off by how much control you seem to have over your style and image. It could be envy, or they simply started to think they no longer know you.

That may happen more often when it comes to the people close to you. It could be your friend, family member, S.O., boss or colleague. If it seems like they resent the positive changes you’ve made to your appearance, that’s a red flag. Your relationship might not be the healthiest one.

The solution here would be a conversation, not confrontation. Be polite and ask if the two of you could talk. Smiling helps. You don’t want to give them the idea that they’re in trouble or there’s a problem.

Once you’ve got your time and place, just be cordial and natural. Start somewhere along the lines of, “I notice you’ve been acting a bit differently since I…” Make the other person comfortable enough to feel they can be honest with you.
You’ll go a long way by engaging in civil conversation. It lets both parties hold a ceasefire, puts aside passive-aggressive behavior. You get to hear their side of things, and it’s your chance to explain why you’ve made those changes. By clearing that up, they might be more accepting.

The foundation of any good relationship is respect. You need it to call it a truce and rebuild bridges. However, you also deserve respect from your critic. It’s your job to figure out whether they’re concerned about you or just hating the style.

If it’s the latter, you’ll have to shake it off. It’s not your fault if they can’t accept the new you. Distance yourself from them if you can. 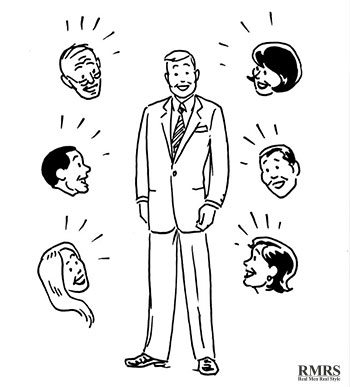 2. Routinely Question Yourself – Take The Critiques Of Others Into Some Consideration

Make this a precautionary measure from time to time. When getting used to certain changes to your style or adopting different ones, take a step back.

Are you really doing this for yourself? Are you aiming for your inner self to shine its brightest? These are the questions for you to keep in mind.

Never lose sight of the big picture – to treat every day like you’ve got a job interview. You always want the best version of yourself presented since you never know what opportunity might come your way.

Remember it’s opportunity you're after, not attention. So every now and then, you should question whether your style might be getting the kind of attention that’s driving away opportunity.

Here’s where criticism helps, especially if it comes from people you trust. Compare yourself to a diamond in the rough – uncut and unpolished when it’s first taken off the earth.

Understand the “flaws” in your style that you didn’t originally see but can now work on. Learn to take in constructive criticism as part of your self-development. Let your ego take the back seat.

As the Jewish proverb goes, “A man who covers up his mistakes will never be prosperous.” You can’t always identify every single mistake or area of improvement on your own. That's why it helps to get feedback on how others perceive you.

Make it a habit to question your stance on style objectively. It will only help you become a better man.

3. You're A Leader – Accept Leaders Are Never Universally Loved, Especially In Their Own Time

To stand your ground with your own style – looking as sharp as you do – takes confidence.

Confidence is a great thing to have, especially for a leader. And as you probably guessed, leaders aren’t usually the most popular guys around.

But there are lots of benefits to showing your ability to lead. You convey a sense of authority, especially with a suit and tie. You command attention instead of just blending into the background. You earn yourself extra time to deliver a sales pitch or pass on an idea to someone. That’s why you’ve got to go the extra mile in looking like a star.

So naturally, more attention could mean more haters. Despite the old saying to not judge a book by its cover, many people still do.

But that shouldn’t get in the way of how you view yourself. You have to BELIEVE you’re a leader who excels and inspires. If others think you’re a pompous jackass who craves attention, let them be.

As long as you’re confident and secure, and you know your intentions, you’ll never have self-doubt. And you should beware of self-doubt – it plants ideas in your head that “prove” you’re not good enough.

Don’t enable the source. Don’t feed the trolls. It’s your race to lead, not anyone else’s.

4. Meditate – Understand Your Left Storytelling Side Is Pretty Crazy

Here’s where you can hone your ability to put mind over matter. It’s easy to watch people meditate and think it’s simple to do. The science behind it says otherwise.

Meditation is seen as “attention training,” which is mainly about getting the right side of your brain (visual and literal) to upstage the left side (analytical). It’s proven that focusing on your left brain leads to a lot of negative thoughts and feelings.

So to counter that, you must train your mind to feed off the “here and now” elements of the right brain. By disengaging from the left side, you’ll find yourself getting less angry, anxious or stressed out.

Proper meditation involves breathing in and out. The process is slow, takes time to get the hang of, but worth the long-term benefits. Doing a two-minute routine once a day is all it takes. With repetition and focus, you’ll soon avoid falling victim to negative stories or interpretations.

5. Surround Yourself With Peers You Can Share Stories With

Finally, don’t think you have to brave the world of scathing critics by yourself. Always know there are guys out there who are struggling the same way. Some might be worse off than you are at the moment.

Either way, it’s good to have a support system. Even the toughest men aren’t immune to hurt feelings. We need to pat each other’s backs once in a while.

We’d like to invite you to join our RMRS Facebook Group (if you haven’t already). It’s the perfect den for guys like you to share stories, say they’ve been there, done that and give advice.

We regularly vet the group to get rid of spammers and abusive users. So don’t miss out on this safe and fun community of stylish everyday gentlemen!

Previous Post: « Offensive Vs Defensive Style | Do You Attack Or Defend? Which Style Philosophy Do You Agree With?
Next Post: Style Podcast #34: 10 Tips I Would Give My Younger Self »