The cafe knot, as the name implies, was a style favored by frequenters of cafes in the early part of the 20th century.

It is a stylish and unnecessarily complicated knot, designed to draw attention to the dresser’s knot-tying prowess (and, generally, to his fine silk necktie as well). It’s definitely a great choice for a conversation starter at a casual party. 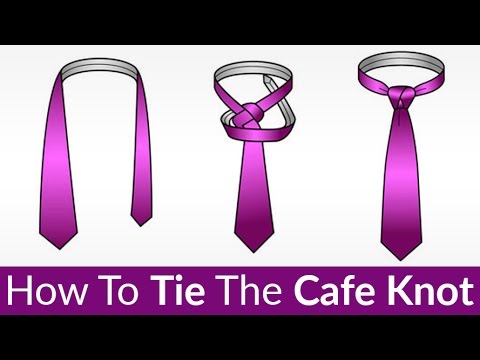 The Cafe Knot – Description And Use

The Cafe Knot is not quite symmetrical, as one “leg” of the triangle overlays the other.

The finished product has a distinct pair of downward diagonals framing the center of the triangular knot. It is not quite symmetrical, as one “leg” of the triangle overlays the other.

While the finished knot is not as bulky as a Windsor or Balthus, it does require a fair amount of length to tie. Ideally the two framing “legs” should be tied with the slim center of the necktie; else they will completely hide the knot between them.

This is an excellent knot to use with a casual suit or a dressier sports jacket, or even with shirt sleeves in a social setting. It should not be worn to an office job or any sort of serious event.

The cafe knot is interesting in that it is primarily tied with the narrow end of the necktie, unlike most knots, which work primarily with the thicker end.

The thick end will only make one short loop at the end, so start it just a half-inch or so longer than you want the finished tie.

It may take you several attempts to get this one right. It’s not a beginner’s knot — and not a particularly functional one, beyond its decorative purpose.

You should tighten The Cafe Knot carefully. Because the thin end is the working end (unlike many neckties), you actually adjust by holding the knot in one hand while tugging on the thick end with your other. Tighten until the knot is snug against your neck, and then adjust the necktie loop until the knot is centered.

Slip the thin end through the tag or loop on the back of the thick end, if you still have enough length in it. If not, use a tie bar or similar accessory to hold the ends together.

Bravo! You now have a lovely, three-legged knot showing off your knot-tying prowess! You've mastered one of the most complicated tie knots out there so give yourself a pat on the back. And of course, allow others to bathe in your glory.

But seeing as you're now a tie knot professional, you should also know a few other different ways to tie ties… after all, you might have people asking you for advice now.