We make them every day…

…even the most successful people.

So why have they accomplished so much?

I’ll tell you – it’s not the mistakes they made…

…but how quickly they LEARNED from them (and avoided repeating!) 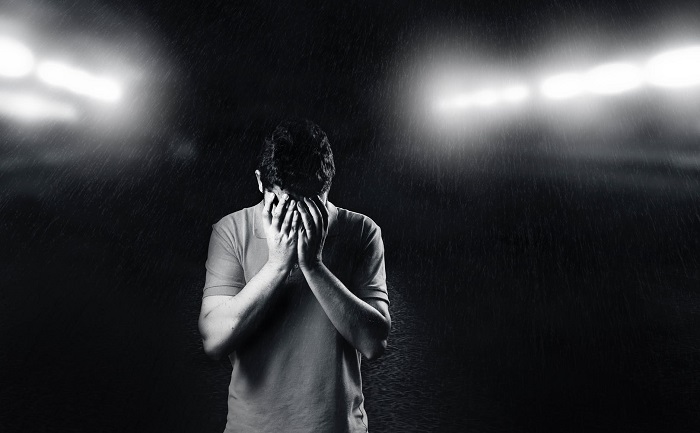 Like anyone else who runs a company, I’ve had my own stumbles…

…but I picked myself up every time…

which has led to learning and becoming a better leader.

(Don’t be ashamed if you’ve already made them. What’s important is taking action right now!)…

Do you brush your teeth twice a day? Is it a habit you were born with? Not at all – you were trained to make it a regular thing. Your parents instilled in you the discipline to do it.

Discipline is about being able to get things done – even if they’re painful or unpleasant – because of an end goal.

Whether it’s making your bed in the morning before you leave, or taking out the trash every Sunday – you do it because it’s good for you. Any annoyance or laziness is overcome by the fact that you’ll be worse off by NOT doing it.

You’ll never be fully comfortable with discipline. In fact, there’s nothing “comfortable” about it because it forces you to act logically – ignoring emotions for the time being.

If you ignore discipline, you’re giving in to the weakness of whatever it is you’re feeling – and that can hurt you in the long run.

Let me tell you about this amazing guy, Nick Vujicic.

When you see him for the first time, you wouldn’t think this is someone who can use a computer, answer the phone, comb his hair, play drum pedals – all the basic tasks we take for granted.

But this guy has done them all… and mastered them. He now lives a perfectly normal life apart from traveling the world as a motivational speaker. 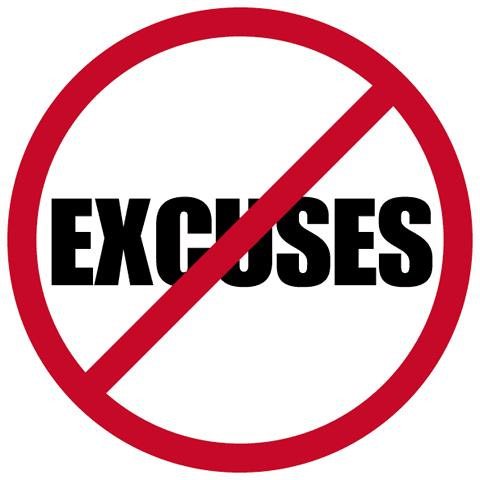 You might say it’s unfair that he was born with such a rare syndrome, but you know what’s so inspirational?

He doesn’t focus on a life without limbs – he focuses on having “a little drumstick” (his foot with 2 toes) to help him get through each day. So I think we can all learn from him about not making “excuses.”

It’s easy to feel like you’ve got a number of things holding you back. I could easily say I’m happily married with 4 kids, my wife likes to stay up late and I enjoy spending time with her. I’d rather be a night owl.

But why should that get in the way of my goals and ambitions? Why should I refuse to get up early and do my work when I know it’s not going to affect my family life? Those things only become excuses if I let them.

Whatever it is you’re lacking when it comes to a goal – money, time, knowledge, skills, connections, etc. – can seem like a dead end on paper. But if you treat it as something to adapt or find a way around, that attitude makes all the difference.

In the end, you can either complain about what you can’t control – or suck it up and play with the cards you’re dealt. Only one of those can actually change things for the better.

What happens to a piece of paper when you stick it against the sun and then position a magnifying glass in between? That’s right – a spark. That little device in the middle focuses the energy so it can burn through things. Without that focus, the paper might still get burned – although it will take much longer. 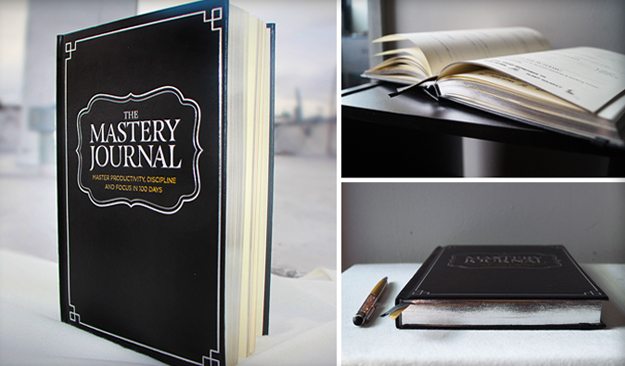 Like other habits, the ability to focus needs constant practice. It’s important for entrepreneurs – as their biggest hurdle tends to be not executing their plan of action. The lack of focus and discipline keeps them from being as productive as possible.

Here’s a useful step-by-step guide to being more productive – “The Mastery Journal” by John Lee Dumas. I happen to know John very well (we both served in the military). He’s a guy who knows what he’s talking about. Many people listen to him – he’s got one of the top podcasts for entrepreneurship in the country.

His journal offers a way for you to master focus, discipline, and become a more productive person in just 100 days! He wants to help you improve these essential skills that matter in both business and everyday life. Find out more about “The Mastery Journal” on Kickstarter.

Ever tried reading a book while simultaneously listening to the news? No? I didn’t expect you to. It’s not the most productive activity. At any point, you’re either missing something important that was said on the radio, or you’re skimming through the text without understanding the message. 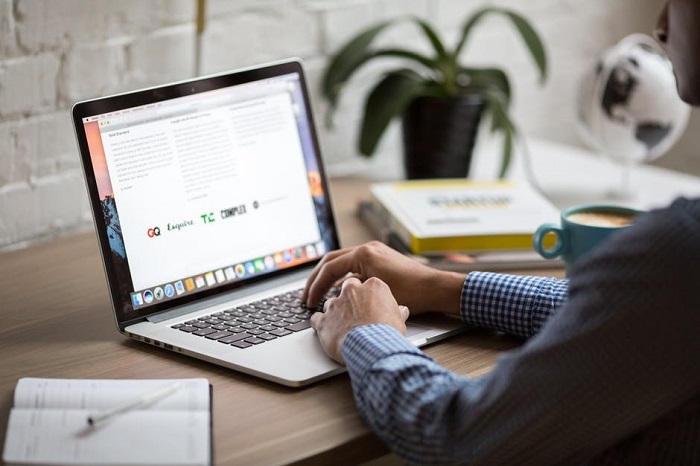 It’s the same deal whenever you multitask. Studies have shown humans don’t multitask well – and those who do it have trouble gathering information. It’s almost like trying to split your brain in half – it just doesn't work.

Computers are believed to be efficient multitaskers, but the truth is they have processors that let them perform things automatically. They’re not meant to follow multiple commands at the exact same second. So why should humans multitask?

It doesn’t make sense to juggle 5 projects in one day – with your mind shifting focus every couple of minutes. Not only can this cause a lot of physical and mental clutter, but the progress of everything is so slow that nothing really gets accomplished.

I could’ve worked on my email sequence project for weeks, but I’d only be disappointed in the fact that it had taken ages to reach 50% – and a half-completed project would never get launched. Instead, I put full focus on it and nothing else – finishing the whole thing in 2 days, spending 6 hours each day.

You might’ve heard artists, creatives or even some entrepreneurs talk about finding the “perfect” time.

They feel there are certain moments that provide the inspiration for something they’ve envisioned – but they’re spontaneous.

I’m not going to say they’re wrong. But the reality is if you choose to be inactive, waiting for that time – you’re pretty much wasting time as well. Not everyone experiences that profound “eureka” moment soon enough…

What I want you to think is this – the perfect time is NOW. It’s not a moment to wait for or rely on. Sometimes the initial work itself will bring out the inspiration you need. And doing that work requires discipline (see #1).

Stephen King realized that. He’d sit at his desk and write 4 pages every day for 1 hour while working as a full-time teacher. He would soon have days when he’d be inspired and write a whole chapter. So that’s the kind of mindset you need – to be proactive toward your goals instead of waiting around.

Let’s be honest here – how many things in life are perfect? Isn’t the concept of “perfect” subjective anyway? Whatever your point of view is, don’t let perfection slow you down in life.

Similar to #5, you can’t always put a hold on the chance to move forward with something because it’s “not ready.” Stick to the timeframe you set early on. Take deadlines seriously, even though it’s your own project.

The point is it’s not worth delaying something for so long because an idea or output isn't “100%.” Are you the audience? Are you buying the product? No. So it’s better to get out something when you feel it’s about 80% and it’s a great opportunity NOW.

It may turn out that whatever looks okay to you is actually fantastic for others. That’s what I experience when people give feedback on my content. They’re happy with most of my stuff and for any comments they send, I listen and make adjustments next time.

Leave it to the great Confucius to tell us:

I believe that talent – as much as it helps to have it – is overrated. Do the most successful people in this planet ever say they got to where they are because they’re talented? No. They mention hard work, dedication, not giving up every time a door closed on them.

Their talent is acknowledged by others, but they persevered just to get their talent seen in the first place. They go through this journey of struggles and heartache – but end up reaping the rewards for a long time.

So it really doesn’t matter if you’re not the richest or smartest fellow in your industry. Being well-prepared is what gives you the biggest competitive edge. Don’t underestimate how much hard work pays off, even if the odds don’t look good.

The underlying concept here is that you should be a little selfish.

This isn’t about snubbing the other person – it’s really about knowing your limitations. You’re human, you have friends and family, and as #4 indicates – you’re not meant to multitask.

Learn to say “no” most of the time. It’s flattering to have others wanting your help or expertise. It’s tempting to join in a project in its early stages because of the people involved.

But if you say yes to everything, you may be forced to turn down some awesome opportunities down the road.

Along with more no’s, say fewer yes’s – and make sure they’re cool enough for you to say “Hell yes!” to. Your driving factor should only be: “Is it worth the extra time without compromising my work and personal life?”

Degrees and diplomas mark the end of a program. But they don't mean the end of education. Life outside of school offers countless ways to keep learning new things. I personally enjoy reading. There’s a lot I can learn from well-written, long-form content (from books and websites).

That’s why I like carrying an audio book whenever I travel. I crave information from successful people, even those outside my industry – inspiring new ideas that can help my business move forward. And I encourage you to do the same in your spare time.

I get it – you’re confident in your own abilities. You’re working on something special. This project is your baby. Other people might complicate things and mess with your vision.

But there comes a point that by refusing help, you’re not allowing your plan to reach its full potential. You start becoming the problem, the limiting factor.

You can’t gamble on being a one-man show because if you wear yourself out – you may fail… and everything else fails with you.

So learn to be humble and build a team of strong individuals you can trust. They should be better than you at certain things – to compensate for your weaknesses.

Treat them like equals but at the same time, make sure they respect your authority. You want some camaraderie shared in a team that sees your goal – with members who are capable and committed enough to achieve it. A team that's in sync will get to win more battles than a lone ranger ever can.

Previous Post: « How A Dress Shirt Should Fit Infographic – Men’s Proper Fitting Dress Shirts
Next Post: Style Podcast #48: 7 Things That Drive Me Crazy About You »