Oliver Stone's 1987 film Wall Street painted a picture of corporate finance that a lot of Americans had never seen before at the time: aggressive, ruthless, and completely immoral.

It also invented a new style made to fit that image. The costume designer for the movie was Alan Flusser, one of the most influential menswear writers of the 20th century.

One of our readers wrote in asking if the style worn by Gordon Gekko — the unscrupulous corporate raider from Wall Street — would be wearable in a regular office job.

Here's the video I made in reply.

For those that prefer not to watch videos, or that want a little more detail, here are my thoughts on the Wall Street movie style in general:

The key thing to remember is that this is a costume, not an authentic fashion style. Alan Flusser‘s design came first — his exaggeration of typical business dress inspired later dressers, not the other way around.

It's a look that was built from the ground up to be aggressive and powerful. And if that's what you're going for, then the Gordon Gekko style can work for you — but it's not subtle.

Here are the key elements that make the Wall Street look so intense:

The initial question we received was actually about the shirts specifically, as well as the overall look.

Most of the Gordon Gekko shirts in Wall Street are what's called “contrast collar” and “contrast cuff.” That means the body of the shirt is one color (blue, in the most famous scene) and the cuffs and collar are another (white, in that same scene).

This is actually a very old-fashioned style with roots in the days of detachable collars and cuffs. Shirts used to be worn for several days in a row, with the collar and cuffs changed in and out to reduce soiling and vary the look. We get our phrase “blue collar” from the working-class wives who started dying their husbands' collars with indigo so that stains wouldn't show as clearly as they did on white cloth.

Flusser brought back the contrasting look for Gekko, and it's been embraced by the financial community. Contrast collars are a typical style for male bank tellers these days.

It has the visual effect of drawing a very clear, sharp contrast. That makes the wearer look bolder and more stark, which makes him seem more intimidating. It's not a great look if you have a naturally low-contrast complexion, however, so not all men benefit from the look.

The pocket squares, cufflinks, watches, and even suspenders in Wall Street are all extravagantly expensive. You can tell they're not from a department store just by glancing at them.

The characters in Wall Street don't miss an opportunity to flaunt their accents, either — Gekko struts around with his leather and cloth suspenders on display, he wears a bold tie clip, and whenever he slaps his hand down on a table you get a look at his thousand-dollar cufflinks.

The remake fell a little short here (one of the many reasons it wasn't as popular as the 1987 version), but in the original Oliver Stone Wall Street the fit is all tailored for clean, sharp lines.

The overall shape of the suits and shirts tends toward blocky, rather than the more streamlined silhouette younger men are wearing today, but the fit was close and the lines were smooth.

The one big exception? The sleeves where they meet the shoulder. Both the shoulder and the top of the sleeves are padded in most of Gekko's suits, which is pure 1980s business style. That look was everywhere even before the movie came out, and it's a dated one — these days most men avoid padded shoulders, at least when taken to that excess.

That said, the over-the-top shoulder padding gives the wearer a menacing bulk, kind of like a linebacker or a gorilla, so it does play into the intimidation that the look is trying for. But you can probably skip it and still look like a tough-guy corporate raider, and you won't look like you just stepped out of a time machine from the 1980s that way. 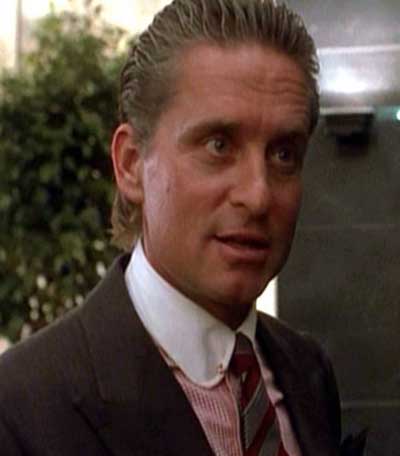 If you watch the whole movie you'll see a lot of colors — there are a couple different suits and many shirts involved.

But they're all very bold and solid, with either no pattern or a big, aggressive pattern.

The suits are mostly solid and plaid. The shirts have thick lines, or a solid color with the contrast collars and cuffs we talked about above.

There are deep, rich blues and purples ,wine-dark reds, and of course the bright white of the shirt collars. It's not subtle.

At the end of the day, my feeling is this: the corporate raider style as portrayed in Wall Street is a costume. It's not a natural fashion that evolved over time. Alan Flusser made it up for Hollywood.

Does that mean you look silly wearing it? Not Necessarily. Flusser did a great job taking existing styles and exaggerating for effect — the roots are still in classic, timeless menswear.

For some guys who feel like they really need to prove their chops in a cutthroat corporate setting, that may not be a bad look.

For the rest of us, toning it down a little and borrowing maybe one or two elements — the sharp lines in the fit and the bold contrasting colors, say — will produce a result that's striking but not quite so aggressive.

It's worth remembering — outside of truly ruthless financial circles, no one thought Gordon Gekko was a good role-model. The character was meant to be an exaggerated caricature of Wall Street's most despicable behavior. That's not something most of us want to associate ourselves with in other people's minds.

Previous Post: « Herd Mentality in Men’s Fashion – Why Style Trends Exist & Men Mimic Each Other
Next Post: Can A Man Wear Colorful Socks With A Suit? | Add Color To A Formal Outfit »