Ever heard of them?

Well if you know what a stopwatch is…

Except they're analog – with the functions of a stopwatch.

So let's clear the air.

Here's a guide to understanding chronograph watches – and how to use them as more than “miniature clocks” every day.

The term chronograph has a Greek origin. It combines the Greek words “chronos” (time) and “graph” (writing) to describe a sophisticated way of using time.

The chronograph is a fancy word for stopwatch these days. Only the early versions made use of actual writing – their dials would be marked with a small pen based on how much time had elapsed in a given situation.

In the year 1815, Louis Moinet invented the first chronograph device. It was designed to help with astronomical equipment.

But things changed in 1821 when watchmaker Nicolas Mathieu Rieussec (known in France as “Watchmaker to the King”) built the first commercially available chronograph. He was commissioned do so by King Louis XVIII – who had been a fan of horse races and wanted to know the exact time each race lasted.

Flash-forward to the second half of the 20th century. Chronographic watches peaked in popularity, and along came the following breakthroughs:

• Watch manufacturer Heuer (now called Tag Heuer) introduced chronographs with a rotating bezel tachymeter – a tool for measuring speed in terms of any unit of distance.

• A number of watch companies collaborated with movement expert Dubois Depraz to develop an automatic (self-winding) chronograph. It was known as the “Chrono-matic” which could wind itself through an off-center micro rotor.

• In 1970, the story of how chronographs saved the lives of crew members aboard the Apollo 13 happened.

Before they began their trip to the moon, President Eisenhower had ordered all astronauts and test pilots to wear chronographs.

That surely came in handy when the spacecraft suffered an explosion along the way. Engines malfunctioned and nearly everything was out of power (including onboard computers).

The crew could survive by letting the moon's gravitation push them back to Earth. But that required precise timing – to turn on the engine and realign the capsule – for a safe re-entry.

But the men pulled it off…thanks to the Omega Speedmaster watches they wore on their wrists. A few days later, the world watched as the crew returned home safely.

Chronographs nowadays are used in a lot of professions and activities:

How To Operate Chronograph Watches

Since the chronograph basically merges a stopwatch with a display watch – the key to understanding its use is knowing there are (usually) two sets of the three clock hands: the second hand, the minute hand, and the hour hand.

The smaller counterparts are located separately on three sub-dials (circles) of the watch face. And they're only activated when you press a button on the side.

The more complex chronograph designs can incorporate extra hands to measure even tenths of a second. But others don't have a smaller hour hand on a separate sub-dial – as they're unable to record hours.

The pushers (buttons on the outside of the watch face) are pressed to start, stop or and reset the timing feature of the chronograph – while the rest of the watch functions like a typical clock.

Start the chronograph‘s timer by pressing the top pusher (which is often aligned with the 2 o’clock mark). This brings all the dials to life – and the counting by seconds immediately takes place.

To pause the timer and all the smaller hands, or to resume them after a while – simply press the top pusher once more.

The chronograph second hand (as in the main second hand of the watch) is a pretty flexible tool. You can opt to start it, stop it from moving or return it to zero – using the appropriate pusher. 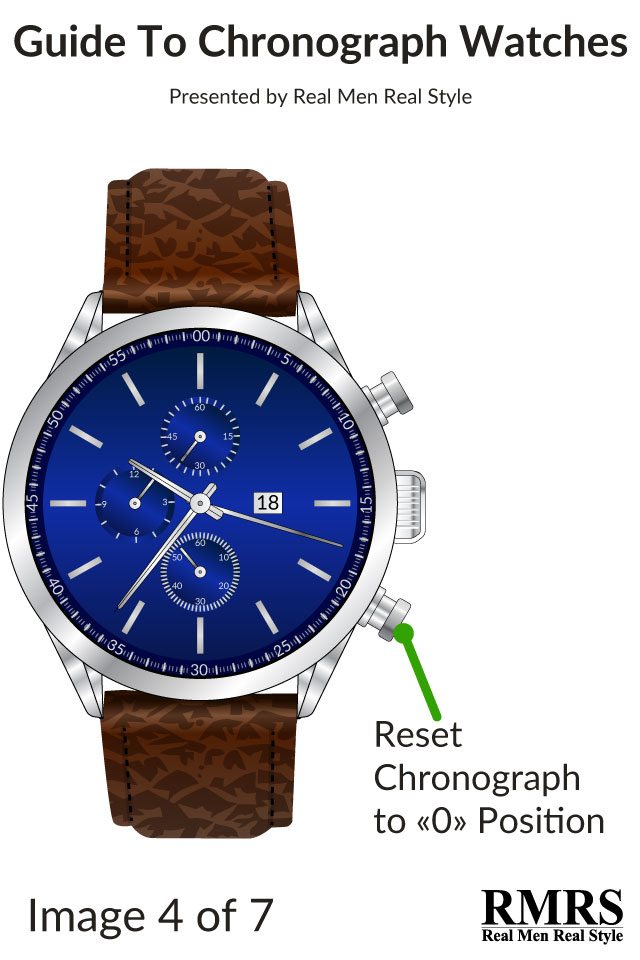 You can reset the chronograph‘s timer completely by pressing the bottom pusher (which is often aligned with the 4 o’clock mark).

The chronograph minute hand (located on the topmost sub-dial) measures how many minutes have passed since you started the timer.

The chronograph hour hand (located on the leftmost sub-dial) measures how many hours have passed since you started the timer.

The small second hand (located on the bottom sub-dial) measures how many seconds have passed since you started the timer.

The exact number of seconds, minutes, and hours that have elapsed is indicated by the sub-registers of the watch. Some chronographs can record up to 12 hours non-stop while others can only go as long as 30 minutes.

Tips & Uses Of A Chronograph

The beauty of a chronograph is it can be used to time a variety of things:

It comes in handy for anything that has a start and an end. You may also use your smartphone – but don't forget that there's the hassle of taking out the phone, clicking the app, pressing the button to begin and then stop.

You won't necessarily have a free hand to pause the timer right away. It's easier when the device is strapped to your wrist like a chronograph is.

Now for some important tips on how to get the ideal chronograph watch:

Some chronographs have a built-in bezel tachymeter that's inscribed around the rim of the watch (Tag Heuer pioneered this).

It's up to you whether or not to buy a watch with this feature. Do you need an idea of how fast you can get something done? Then a tachymeter does that job perfectly.

It's a tool that takes note of how many seconds it takes to cover a distance or complete an action – and converts it to the number of times that will happen in one hour.

Let’s say you’re driving a motorcycle on a planned route and the distance between the first and second turns is 1 kilometer. With that info, you can use the tachymeter on your watch to measure speed. As you make the first turn – press the start button on your chronograph. Then press to stop once you've made the second turn.