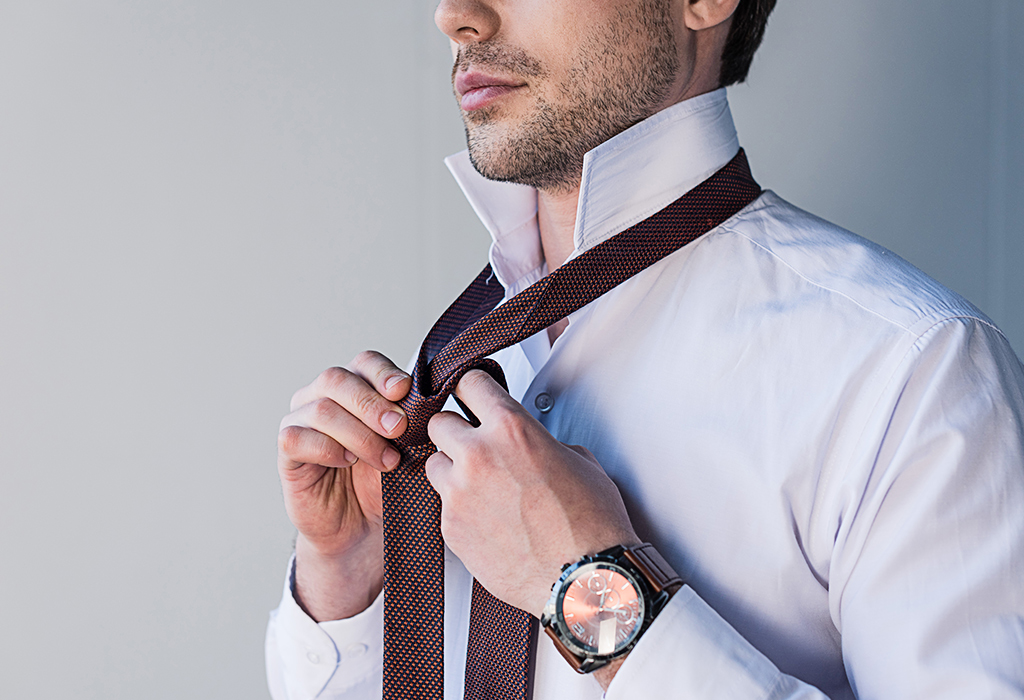 How stylish do you think you are?

You may have quality jackets, shirts, trousers, and leather shoes in your closet…

…ready for those grand/special occasions.

But what about the SMALL details…

No problem – you can just do a Windsor, right?

That can get a little boring.

Especially since there are many other options that:

So have some fun!

This self-releasing knot is said to be named “Nicky” after Nikita Kruschev – who traveled to Milan and discovered these quick-tying “inside-out” tie knots (used for store windows and displays). It requires a relatively small amount of length, so it's great for taller guys or those with slightly shorter neckties.

This one has come a long way from when it first came out in a Swedish mail-order catalog (for clip-on or pre-tied neckties). It's notable for its diagonal symmetry and a nice curved “bottleneck” at the center – like an hourglass figure – which may get a few people talking during your next event.

The Oriental knot (aka “simple knot”) is pretty much an easy-peasy knot which just needs a relatively small amount of tie fabric to work with. There's only one horizontal turn during the whole process – no joke! That's why you'll be able to finish it in about 60 seconds.

If you're a man with broad shoulders or a distinctly round face – the St. Andrew is the perfect choice for you. It's a medium-sized necktie knot which helps maintain balance in your proportions. Not only is it self-releasing but it's also versatile for different face shapes and settings.

Does a perfectly shaped triangle look like an awesome feature for a tie knot? Then you're in luck! That's exactly what the Hanover offers. It'll do wonders for your professional image and status when you're attending business or corporate events.

Who would've thought that a certain tie knot – tied as a last-minute adjustment on a news anchor's necktie – could lead to so much buzz and make the anchor a bit more famous? That's the story of the Pratt/Shelby/Pratt-Shelby (depending on who you think deserves the credit). It's a nice alternative to the four-in-hand or small knot.

Although it's called “Victoria” – there doesn't seem to be any direct link between this knot and Her Majesty. But it is quite sophisticated – as a bulkier version of the four-in-hand (since there's an additional pass across the front of the knot). That helps reduce the lengthiness of your necktie.

The Grantchester knot is rather large in size – so larger men will enjoy it the most. It's comparable to the Windsor in terms of thickness (although the final result is slightly shorter). And it's almost got the same asymmetrical shape as a four-in-hand. Use a thinner tie for this one.

For guys who are on the big side or have a narrow face – the Plattsburgh will really come in handy. Unlike the St. Andrew and other knots with a similar bulk, this one has a less broad structure that makes it very suitable with spread collars.

We have a Polish-French painter to thank for this unorthodox necktie knot. Some people consider it a “cousin of the full Windsor” but the process of tying it takes far more time…and patience for that matter! Just make sure the necktie is considerably long and it widens pretty quickly. Then you'll be amazed by how it turns out in the end.

Previous Post: « How To Dress Up According To Your Body Type | Men’s Body Shape Style Guide
Next Post: Boutonnieres & Men’s Lapel Buttonholes | How To Wear A Flower In Your Jacket Lapel »