Are you man enough to wear a Trinity Knot?

This flashy, trefoil-shaped knot that is guaranteed to stand out. The knot is quite large and impossible to miss. As you may have guessed, it's difficult to master. Some men love it, some hate it. We'll let you be the judge!

If you want to try out this unique knot, read on and watch our video below. 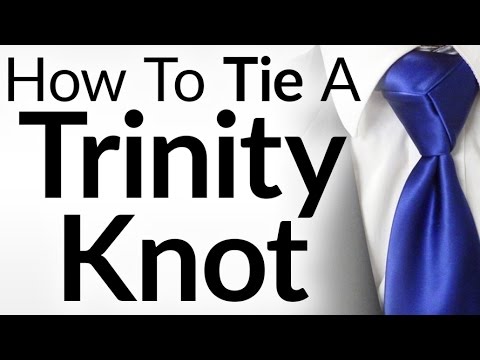 Click HERE To Watch The Video –  Are You Man Enough To Take On The Trinity Knot?

Summary Of The Trinity Knot

#1. The Trinity Knot – Description And Use

The shape is symmetrical along three axes that meet in the middle, rather than one vertical axis down the center like most symmetrical necktie knots.

It is much too “show-offy” for business situations and can look overwhelming in busy patterns. Select a relatively plain tie – one without too much thickness as the knot is quite bulky.

The shape of the knot is formed by the narrow end of the tie. This means you’ll want to select a tie that has a relatively untapered narrow end.

If there’s a noticeable diagonal taper to the sides of the tie down near the narrow end, the three folds of the finished knot will not be the same size, and the effect will be ruined.

This is one where the knot is its own reward.

There’s no reason to learn it and work your way through the many steps of tying it unless you think you’d enjoy having the unusual trefoil shape under your chin.

But if that does sound like something you want to do, this knot is pretty much your only way to do it — so follow along, and don’t be discouraged if you have to stop and restart a couple times.

After all, if it were easy and convenient, it would have evolved into the “traditional” method of tying our neckties decades ago.

This is a knot that may require a bit of “dressing.” Spend a moment straightening the three folds and working any remaining slack out of the knot.

Love it or hate it, The Trinity Knot is certainly unique. Maybe you're more of a traditionalist when it comes to tie knots? Perhaps you want to learn how to tie a simpler, more elegant knot? We've got just the article on tie knots for you here.

Previous Post: « How To Tie The Trinity Knot Infographic
Next Post: 5 Ways To Earn $1,000 In One Week | How To Make One-Thousand Dollars In 1-Week »