Have you heard of it?

It's something of an underrated knot.

And it's rarely mentioned or talked about.

But despite its relative obscurity, the Nicky Knot is actually a versatile tie knot that can fill a number of roles. It might not be the only tie knot a man needs to know, but it’s certainly on the short list of good ones to have practiced.

And today, we're going to show you how to tie the Nicky Knot. 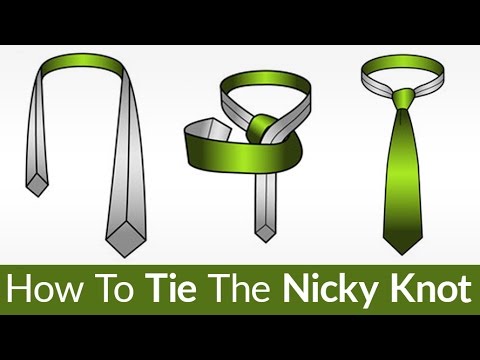 The name “Nicky” supposedly comes from Nikita Kruschev’s visit to Milan, where quick-tying “inside-out” knots like the Nicky and the Pratt knot were commonly used in shop displays and tailors’ windows.

A Nicky Knot uses a relatively small amount of length. This makes it a good option for tall men or men with ties that are a touch on the short side.

It's slightly thicker than the four-in-hand knot. And the Nicky Knot has a symmetrical appearance (although in mathematical terms it is not, technically, a symmetrical knot, as it has more “moves” on one side than the other).

In size, the Nicky falls between the four-in-hand and the half Windsor. It can be particularly useful for men wearing skinny knit ties — a four-in-hand knot tied in a skinny tie is so small it looks absurd. The Nicky Knot's smaller structure can be hidden under even a skinny band of cloth, while still providing a nice hefty knot in a knit tie.

Now you’ve mastered this unusual but useful knot, it’s time to broaden your skills. Did you know there are 18 different ways to tie a tie? Why not try your hand at another tie knot?

Previous Post: « How To Tie The Kelvin Knot
Next Post: A Beginner’s Guide To Wearing Cologne | Why & How To Wear Cologne Perfume Eau de Toilette Video »