Today, I'm going to be talking about button-down collar rules.

“Antonio, we had a seminar on business etiquette last week and the discussion of wearing a button-down collar shirt with a suit came up. The speaker was very adamant that men should never wear a button-down collar shirt with a suit, only with a blazer. To a limited degree, I agree with her. However, if you're in a working environment where suits are hardly ever worn, are you just happy just to see men making the effort and should we try to make them feel bad if they break this rule?”

Let me just go ahead and explain the rules of button-down collars and then I'll talk about the bigger issue, which is what if you see someone violating the rule.

Button-down collars, they are casual. So normally, you wouldn't see them worn with a suit because a suit, by its very nature, is more formal. So it's like mixing water and oil. They just don't go well together.

Let's take it down a notch and as we know, right below a suit comes a blazer with a pair of dark trousers so it's not truly a suit, and that's where about as formal as I would recommend that a man wear a button-down collared shirt with this type of a setup. 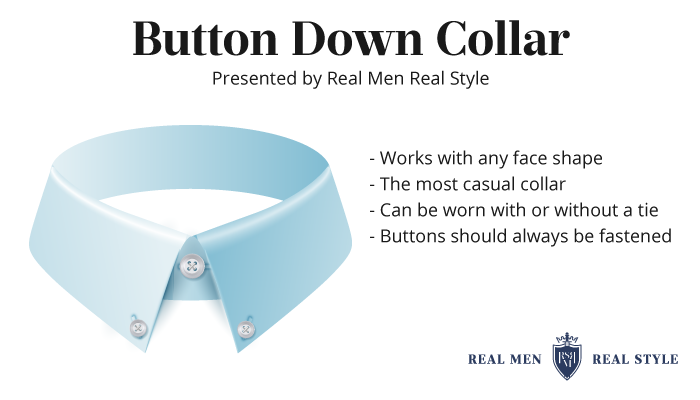 With a sports jacket with a pair of odd trousers or even denim, it looks much better. It fits the very nature of the item and the clothing. And then when you're wearing a dress shirt by itself — well, hopefully you have pants on.

If you're wearing a shirt by itself or wearing a sports jacket, that's when the button-down looks pretty good because it matches the casual nature of the outfit that you're trying to pull off.

Matching it with a tie, ties are a bit more formal in nature, although there are many casual ties. So match it with a casual tie, it looks pretty good.

What do I mean by casual? Let's go with something that's made perhaps from a worsted wool or it's got a bit of a napped surface to it, or even a silk tie that has a very casual pattern to it. I'm not talking novelty ties here. I'm talking ones that have repeat patterns. Probably about a striped tie is about as formal as I would want to go with the button-down.

Those are in general the rules. However, whenever I see a man violating the rules, and I've broken these rules by the way.

I'm not going to mention it because a true gentleman never points it out unless you've got something hanging on your teeth, then you're going to go tell somebody. But if it's a small thing like that, you're not going to correct them.

If somebody has their jacket unbuttoned, you don't go up to them and button it up because it's one of those things that you respect another man and the way he puts himself together.

You may want to offer guidance in a very gentle way. Perhaps it's something that you may point out that, “Hey, I found this great website and they've got all this good information. You've got to check out this video. What do you think?”

That's a much better way of pointing it out than actually trying to embarrass the guy in front of other people.

Because people are not going to remember what you say to them. People remember how you make them feel. Remember that. It's pretty important, and you don't want to ever make anyone feel small or inferior because really, what does it say about you as a person?

That's my rule when it comes to dressing, is that I don't overstep my boundaries and try to push something, and I never say never because I have seen some men pull things off, which I didn't think could be done.

At the end of the day, my advice is don't wear that combination, but if you see somebody who is or if you do, more power to you and best of luck, but someone should not overstep their boundaries and try to correct that.