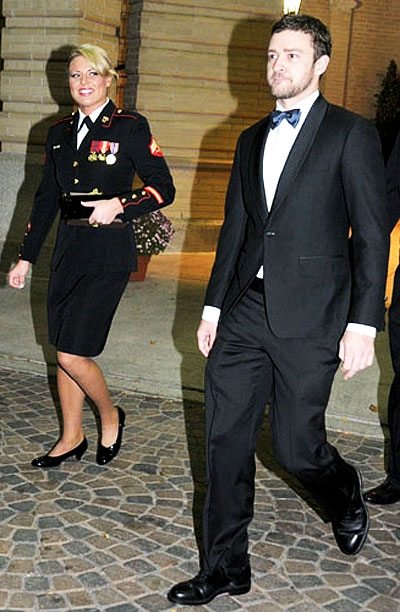 Justin Timberlake did this right.

Always the center of attention wherever he goes, JT can't escape from his legion of fans and the press that hounds him.

And yet on one night in November he was a simple guest at an event much bigger than any one man.

Justin Timberlake's attendance to the Marine Corps Birthday Ball is a perfect example of how to attend an event with style yet not steal any attention from the main attraction.  And FYI, this is coming from a Marine.

Justin understood this was about celebrating the history of the Marine Corps and remember the Marines who have served and paid the ultimate sacrifice.

He did an excellent job balancing his status as a celebrity and obligation as a guest.

Here is how he did it.

He could have easily worn something bright or flashy to draw attention to himself or a favored designer.

Instead to this formal Marine Corps Ball JT wore a classic one button shawl lapel tuxedo with simple leather oxfords and a timeless white cotton shirt.

His only extravagance was a subtle dark blue striped bow-tie; not the classic black but well within the confines of modern black-tie guidelines. 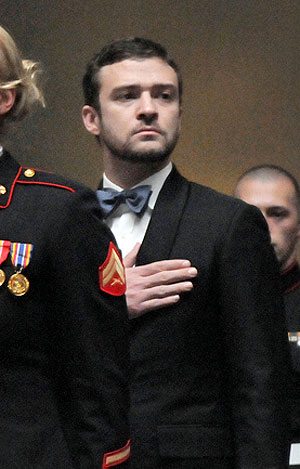 Lesson 2 – He followed the lead of his more experienced date

Justin had never attended a Marine Corps Ball, and thus did not know what to expect.  Smartly, he followed the lead of his female date.

Instead of parading around and assuming he was “the man” who would be shown around as a VIP, he spent most of his time close to his date and most likely watched her moves closely to pick-up when to stand, sit, sing, and socialize.

He put his hand on his heart at the right time, and neither shied away from the camera nor sought it out.

Lesson 3 – He was gracious with his time and praise

You can read Justin's blog post here, his date's interview here, and there are going to be dozens of personal accounts all over Facebook.

The short summary though is he was courteous, friendly, and came across as “just another guy”.  This is exactly how a gentleman should behave and be remembered.  His blog post reinforces this praise; he extols the hospitality of his military hosts and is clear that he was humbled in their presence.

A perfect display of manners.

Why This Matters To You

I know most of you don't have millions of fans and the press camped out your door.  But many of us, especially those of us that do dress well regularly, do face a similiar problem as we don't want to outdress our boss or the bride and groom at a casual wedding.

In these cases – the lessons above are very applicable.

Because it not always about you as an individual.

Instead it's being man enough to care about the needs of others ahead of your own, and then dressing right for the occasion at hand.

What Is A United States Marine Corps Birthday Ball?

The Marines were founded by the Continental Congress on November 10th 1775.

In a Bar.  Philadelphia's TunTavern to be precise.

Marine Corps Birthday Balls are held across the world and are celebrations that highlight the history and future of the USMC.  The event is taken very seriously by all current and past Marines – and you'll find celebrations from the Barracks in Washington DC to the mountains of Afghanistan.

The ball does not have to be on the November 10th – commands choose a date that works for them close to the day – which is a great bonus for Marines as many of us attend multiple Balls with multiple dates (something my wife knows I never did…..). 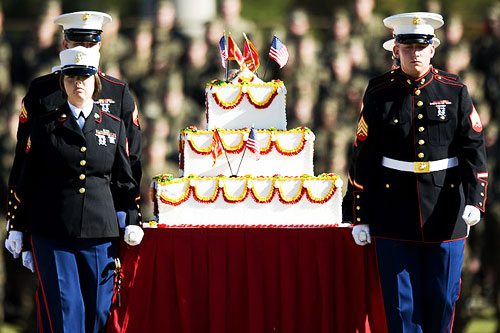 Expect to See These Events at A Marine Corps Birthday Ball:

#1 – Troop Formation and the Reading of Marine Corps Order 47

The order is as follows:

On November 10, 1775, a Corps of Marines was created by a resolution of Continental Congress. Since that date many thousand men have borne the name “Marine”. In memory of them it is fitting that we who are Marines should commemorate the birthday of our corps by calling to mind the glories of its long and illustrious history.

The record of our corps is one which will bear comparison with that of the most famous military organizations in the world's history. During 90 of the 146 years of its existence the Marine Corps has been in action against the Nation's foes. From the Battle of Trenton to the Argonne, Marines have won foremost honors in war, and in the long eras of tranquility at home, generation after generation of Marines have grown gray in war in both hemispheres and in every corner of the seven seas, that our country and its citizens might enjoy peace and security.

In every battle and skirmish since the birth of our corps, Marines have acquitted themselves with the greatest distinction, winning new honors on each occasion until the term “Marine” has come to signify all that is highest in military efficiency and soldierly virtue.

This high name of distinction and soldierly repute we who are Marines today have received from those who preceded us in the corps. With it we have also received from them the eternal spirit which has animated our corps from generation to generation and has been the distinguishing mark of the Marines in every age. So long as that spirit continues to flourish Marines will be found equal to every emergency in the future as they have been in the past, and the men of our Nation will regard us as worthy successors to the long line of illustrious men who have served as “Soldiers of the Sea” since the founding of the Corps. 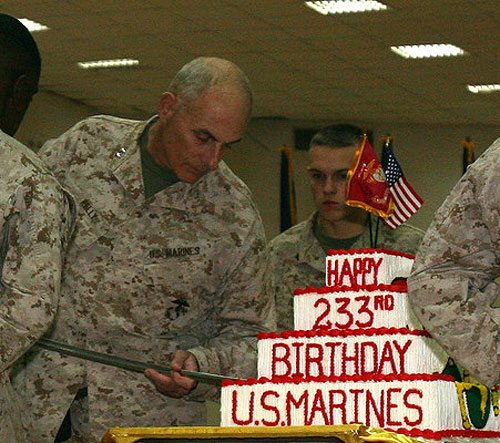 Since 1952 the oldest Marines present is given the first slice and then he passes it on to the youngest Marine in the room.

This symbolizes the passing of the baton from old and experienced to young and hard charging – and the need for both in our Corps.

Can be argued at #1, preferred by many at #2, but I don't drink like I used to so it's fallen lower for me personally.

#4 Message from the Current Commandant

The Marine Corps Commandant is our top Marine.  He's the guy that looks out for us in Washington, but is never too big to visit with recruits in a chow line or join a 20 mile forced march.  The Commandant's message is modern, motivating, and timeless in its appeal to our ethos as warriors.