For over 58 years, 007 has graced the silver screen and worn a ton of different outfits.

Everything from tactical gear to black tie, Bond has worn it. 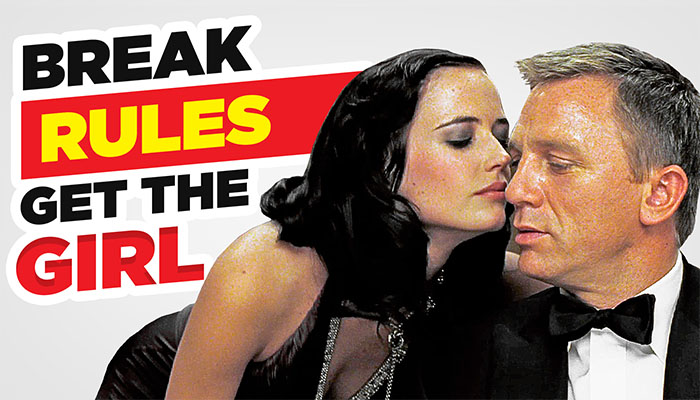 This holds true to style as well. Bond breaks style rules left and right and still gets all of the girls.

As 007 himself says in Moonraker, the only thing he’s broken is his tailor’s heart and that is most certainly true after breaking these rules…

In Diamonds are Forever, Bond’s hunt for Blofeld leads him to the doorstep of Willard Whyte’s personal home.

He is sporting a great linen suit, made by Anthony Sinclair, for the warmer climate. The linen suit is a great alternative to stay cool in the heat.

He paired a great cream-colored shirt with the linen suit and brown leather monk strap boots. He also wears an extremely short tie.

This is a style mistake.

Color aside, the length just makes it look like a child’s tie.

The proper length for a tie is around an inch above or below your belt buckle. Any more or any less, you look like an amateur suit-wearer.

There is also another style mistake in this image that we will discuss later; can you find it?

Despite this, in Diamonds are Forever, Bond (played by Sean Connery) does, however, win-over Tiffany Case at the end of the movie played by the beautiful, Jill St. John.

James Bond has lived through a lot of different trends in fashion.

In the late 1980s, Timothy Dalton’s Bond showed us all how not to wear a suit. In true Miami Vice style, his suits throughout the film are 2x too large.

The suits also have heavily padded shoulders – this trend was very popular in the late ’80s.

This makes Bond look unkempt and disheveled in his suits.

On the flip side of the coin – the trend of suits in the 2010s was for them to be too small or undersized.

Daniel Craig’s Bond in both Skyfall and Spectre follows this trend. While Craig is in perfect shape and the choices of fabric design and styling of patterns in the suits are amazing, the fit is not.

A shrunken fit is seen when the suit pulls awkwardly, making wrinkles appear even when one is just standing still.

Despite these infractions, in License to Kill, Bond is intimate with two women: Lupe Lamora (Talisa Soto) and Pam Bouvier (Carey Lowell).

In Skyfall, Bond has a short-lived relationship (before she is killed by the bad guy Silva) with Severine (Berenice Marlohe) and in Spectre, he actually retires from being a spy with Dr. Madeleine Swann (Lea Seydoux).

Broken Rule 003. Buttoning the Bottom Button of a Suit Jacket

We all know that a suit jacket or blazer has two buttons. Of course, if you’ve been following my site, you’ll also know the story of Edward VII and his inability to close his bottom button of his jacket or waistcoat.

Well, James Bond must have been too busy to worry about these rules.

In Dr. No, From Russia with Love and Diamonds are Forever, he broke this rule. Just like the short tie, this mistake makes the suit wearer look like an amateur.

In Dr. No, Bond’s first cinematic outing, he wins over the affection of Honey Rider played by the iconic actress, Ursula Andress. Bond also becomes smitten with Tatiana Romanova (Daniela Bianchi) in From Russia with Love.

I’m starting to wonder about these style rules…

Broken Rule 004. Pairing a Blazer with Pants That Match Too Closely

In Spectre, Bond is again on the hunt for Blofeld and his journey has taken him from Mexico City to Rome and finally to Tangier where he is with the stunning Dr. Madeleine Swann (Seydoux).

Everything is great about the outfit – other than the pants matching so closely to the jacket.

When dressing in a blazer and trousers – use colors that complement but are not so close that they match.
A good example is navy and khaki as Roger Moore’s Bond shows off so well in The Spy Who Loved Me.

Nevertheless, Bond runs away with Swann at the end of the film.

Broken Rule 005. Matching Your Pocket Square Exactly to Your Tie

In Pierce Brosnan’s first outing as James Bond in Goldeneye, he is suited by Brioni who designed and tailored all of his suits to perfection for Brosnan.

Bond wears two different suits with a navy handkerchief that matches too closely with his tie.

Pierce Brosnan's Bond is especially guilty of this.

As we have stated on RMRS before, the pocket square should complement the color of your tie and not match it exactly.

This didn’t stop Bond from winning over the beautiful Izabella Scorupco who played Natalya Simonova in the film, though.

Broken Rule 006. Messing Too Much with Black Tie

Throughout the Bond franchise, each actor has worn many different tuxedos through his tenure as the titular character.

In 1969, the world was introduced to a different James Bond, played by George Lazenby in On Her Majesty’s Secret Service. In the film, he rocked many different styles from that have not aged well; however, his take on black tie is the most egregious.

Black tie is the most formal a man can get with dress clothes and the ruffles make the look far too casual. (To be fair, Bond wears it much better than Austin Powers does.)

Try mixing up black tie as 007 shows (correctly) in these photos!

In OHMSS, Bond actually gets married and settles down with the beautiful Tracy di Vicenzo (Diana Rigg).

This marriage was short-lived as Blofeld and Irma Blunt shot and killed her as Bond and Tracy were driving away from the wedding.

Could that be because of the ruffles?

Double denim is a style move that many men stay away from. We all know that if you were to wear a denim jacket or shirt and jeans that the shades of denim should be very different from each other.

Bond doesn’t seem to care for this rule when wearing the Canadian tuxedo.

In Live and Let Die, Bond (Roger Moore) is looking for (Spoilers! But come on the movie came out in 1973!) Dr. Kananga/Mr.Big’s (Yaphet Kotto) poppy fields with the CIA double agent, Rosie Carver (Gloria Hendry).

I can best describe this look as a blue powder jean suit?

It is obviously not Mr. Bond’s best look.

While 007 hasn’t worn double denim again on screen, current Bond actor Daniel Craig does in his personal life and shows us exactly how to style it correctly.

In Live and Let Die, Bond ends the movie on a train, after defeating the bad guys, with Solitaire played by the ever beautiful, Jane Seymour.

However in No Time To Die, Bond’s newest adventure, he is sporting a beige corduroy suit.

Yes, 007 is wearing corduroy; it is coming back!

In behind the scenes photos, Bond is wearing suspenders with trousers that have belt loops.

It may not be breaking the rules… but it is bending them.

Suspenders with belt loops is not a glaring mistake, but it looks unseemly.

Since Bond undoubtedly has his suits made-to-measure for him, why would he choose to have the belt loops if he is going to just wear the braces?

We haven’t seen the movie, it’s hard to tell if this will be shown on screen at all, however, it is another example of Bond bending rules.

Just pick one. Suspenders or a belt; not both.

Will Bond win this round again? Will he ride off into the sunset with Dr. Swann again or perhaps Ana de Armas’s character, Paloma? We’ll find out in April; however, with Bond’s track record, he is probably going to win.

James Bond doesn’t always follow the rules of style and neither do you.

Just please don’t try to pull off ruffles or a powder blue jean suit! Even though James Bond always returns, you won’t…

Previous Post: « Travel Hacks For Men: 180 Outfits STUFFED In One Bag
Next Post: The Godfather Part II: The Style Behind The Mob »