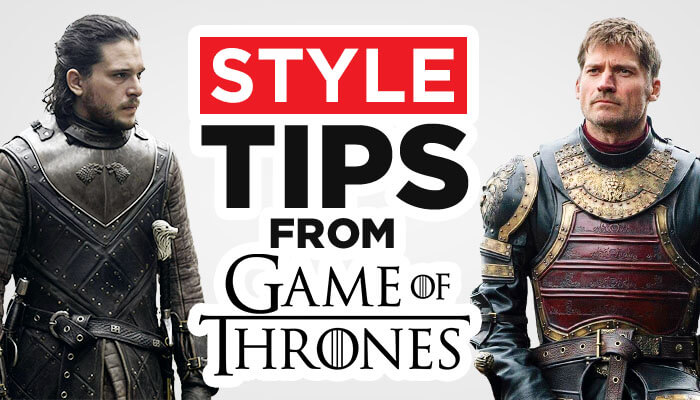 Game of Thrones style tips. Why are they useful?

The show is a lot of things – a political drama, a sensation for nerds everywhere, and a global cultural phenomenon. Aside from the obvious entertainment we get from the show however, there are many lessons to take from it.

Gentlemen, here are seven style tips you can learn from Game of Thrones – and no, it doesn't require you taking The Black.

Without further ado, let's get into it…

Game of Thrones style tips when it comes to Jamie Lannister are all about using colors.

The Kingslayer belongs to the wealthiest family in Westeros and looks like it – Jamie embraces the Lannister colors in a big way.

When you see him in the show, he's often sporting the signature Lannister uniform – a set of armor painted in red, black, and gold.

But that's not all.

In season 1, this man favored a long leather coat that was a light tan with red accenting whilst in season 7 he donned black leather with a red scarf. Either way, it's clear from watching him that he's deliberately narrowed down his wardrobe to a distinct color palate – that of his family crest.

What about accessories? Well, fans are more than familiar with the golden hand he uses since the original was severed.

Embrace colors that serve your complexion and give your overall look a bit of panache. men with cooler skin tones will likely find their stride with silver, white gold, or platinum. The darker you are, the more you might opt for gold or rose gold.  It's up to your personal preference, but have at it.

Just don't go overboard – especially if you started out. We all know what happened to Vycerys when he used a bit too much gold…

6. Sir Bronn of The Blackwater – Breaking The Rules

It's a joke among fans that if Bronn doesn't get his castle, then the whole series is worthless. How could a lowly mercenary make his way up to being the lord of a keep anyway?

His Game of Thrones style tip? Screw the rules.

This goes all the way back to season 1 when he makes his first appearance in Tyrion Lannister's trial by combat. During the duel, he barely wore armor and fought dirty. He surely drew the ire of the nobles watching, but the simple fact is that he won and Tyrion could go free.

This is a core character trait he keeps up throughout the show that sees him not only survive, but thrive.

The lesson thus is that as men we need to question everything around us – especially rules that might be holding us back. At times, we may even need to go about breaking those rules to get the results we want. Don't be afraid to fight a little dirty in life, gentlemen.

Just remember – balance is key. This isn't a validation to go on and become a felon.

5. Ser Davos & The Power of Speech

This lowly son of a crab-fisher was caught thieving and got his fingers severed by Stannis Baratheon. Yet when we first see Ser Davos Seaworthy, he's Stannis' right-hand man and admiral. Even after Stannis is killed, he managed to make it through the show and find himself to be Jon Snow's best confidant.

Davos isn't as ruthless as other powerful characters – in fact, he's rather polite. He says what he feels is right, but also does it in such a way that he gets away with it every time. Not everyone loves him, but everyone respects his penchant for honesty.

This is especially apparent when Jon Snow meets Daenerys for the first time. Daenerys calls Jon a Lord, but Davos cuts in and corrects the dragon queen – insisting that it was in fact “King Snow” even when Jon hesitated.

What does this all mean for you gentlemen? Just be polite. etiquette may vary by region, but manners are universal. Be mindful of them – From common sense things like actually using utensils at the dinner table (you'd be surprised)  to refraining from eating while others are still being seated.

Tyrion is a fan favorite, and it's easy to see why. This dwarf managed to overcome his physical disabilities by outsmarting others and metaphorically running circles around them. Even when other characters insult him, he deflects it in such a way that often silences them.

That's why his Game of Thrones style tip for men is all about the mind. Tyrion himself said in season 1 that “A mind needs a book like a sword needs a whetstone.” It's essential that a gentleman stay well-informed and maintains a rounded base of knowledge with which to carry on a conversation and simply appear to be more cultured. having anything close to his sense of humor will have you seen as more likeable.

Even if your wit isn't your talent – take a page from Tyrion's instruction manual and consider what your natural weaknesses are, then sharpen the skills to compensate for and overcome them.

There's much that is profound about Jorah's character. His fall from grace and story of redemption is compelling, but what really grossed me out was when he contracted greyscale – that disease that turns people into stone men.

2. Sandor Clegane – Own Your Imperfections

The Hound has a few imperfections – namely the burn marks that cover most of his body. Understandably, he also has a strong fear of fire – yet he duels and slays Beric Dondarrion despite him using a flaming sword.

The Game of Thrones style tip we get through him? As men we need to get over it and push on. Sandor Clegane recognizes and owns his scars and fears, getting over the fact people might look at him differently and being a badass regardless.

Next time you worry about that zit you got this morning, think of The Hound.

And now comes the winner… He might surprise you

When you see Jon Snow, whether he's leading the Night's Watch or accepting the title as King of The North, he's usually wearing one color – black.

What does this mean, gentlemen? Not to go out and buy your whole closet in black, but to be aware of its power.

Black is a color that goes with virtually anything in a man's outfit. Even if black isn't your thing, your core wardrobe should be built on dark colors like this – colors like navy and dark grey. They're not only great for a professional environment, but they also make a man seem more powerful and aggressive.

Last but not least, gentlemen, is the single most stylish character in the show – Petyr Baelish.

What's remarkable about him is that he comes from absolute obscurity. Despite this, he's always manipulating power behind the scenes and rubs elbows with the most powerful figures on the continent.

You wouldn't think he had humble origins by looking at him – He speaks more eloquently than most, but above all else he has the most impeccable and well-fitted wardrobe out of everyone.

The lesson? no matter what he comes from, his presentation always commands attention from others in the room. Even the king(s) himself goes silent.

When your outfit is impeccable – your jacket is fitted, your pocket square is folded right, and your shoes are properly shined, then you're guaranteed to be taken more seriously than your peers.

Game of Thrones isn't just a show, it's a cultural phenomenon that will likely have the same longevity as Star Wars in the years to come. There's a lot to take away that goes well beyond simple entertainment – and style is a big one.

Use these Game of Thrones style tips to up your game, and make others notice.

Just don't go out and make a play for the throne unless you're ready – when you play the Game of Thrones, you either win or you die.